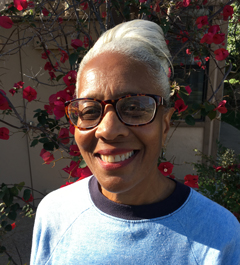 Shahidah Sanchez, nicknamed Sami, was born in Springfield, Illinois and grew up in Champaign, Illinois. She knew from the moment she joined the Red Cross Youth in 7th grade, that she wanted to become a nurse someday. In 1980, as a single mother of two, living in the projects in Decatur, Illinois, she began training at the Decatur School of Practical Nursing. After earning her LVN (licensed vocational nursing) certificate, Sami worked nights at St. John’s Hospital in Orthopedics and Hospice. For 30 years Sami served her country as a civilian in MEDSURG with the Navy, and her community as a Special Needs LVN with the school districts, among other assignments.

After retiring in 2011, Sami still had a dream to continue her education with the goal of serving because she loves people. She had taken several courses focused on gerontology at the community college, but until this past fall she had five classes left to complete her transfer to San Diego State University (SDSU).

In September 2015 she heard a message at church about completing goals and she was motivated, but her previous gerontology major was no longer available at SDSU. Sami realized that in her love for people and current countywide service through the Salvation Army’s Food bank, tutoring, and rehabilitation programs, she was passionate about a new focus: Sociology! Sociology made so much sense. Sami lived through many of these topics herself, including domestic violence, divorce, single parenting, and a close relative finding success after prison.

Sami’s new obstacle is the math she’ll need to relearn after so many years out of school. In order to successfully complete Math 92, a prerequisite for one of those last five classes, Sami started math classes at Grossmont Adult School in October 2015. She studies algebra every Monday and Wednesday. Her goal is to be ready for Math 92 this coming August, Statistics next Spring, and on to completing her AA for transfer to SDSU.

Sami lives in El Cajon and takes her concurrent college class downtown. She doesn’t own a car and leaves three hours ahead to make time for the long bus ride. Sami says that adult education makes the difference in her ability to achieve her goals! Studying math for free is a gift and right here in her own community! Sami volunteers as an elementary school and detention center tutor. She has seen her life transform in so many ways because of education. At 66 years old she believes in new opportunities for success. Through the affordable, flexible, and community based classes offered at Grossmont Adult School, Sami has been be able to begin achieving her dreams.