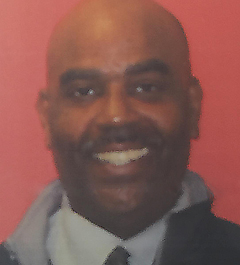 Michael Ward is a hard working individual who entered into the culinary arts program at Maxine Waters Employment Preparation Center after 19 years working in security services at ESPN. He is a focused and motivated student. He has taken full advantage of his opportunity to study culinary arts and learn a new trade. Michael has yet to miss a day of school, always arrives early, and is one of the last to leave.

Michael struggled very much in school as a youth and he was eventually diagnosed with dyslexia. Despite his learning disability, he graduated high school and had a long career as a security guard. He raised four children and put them all through school and college. He currently is caring for his elderly mother as well. Last year, he was laid off from his job in security. He took that as an opportunity to follow his passion for cooking and embark on a culinary career.

His goal is to own a catering business and restaurant. His mission is to feed his community healthy and affordable Cajun-inspired food. Michael has been an active member in the Watts community of Los Angeles. He is currently a youth counselor at GRID, a gang prevention youth program. He counsels youth on making positive choices in their life and helps them choose alternatives to joining gangs.

Michael has been one of the most dedicated and focused students in class. He is often observed taking copious notes. He has mentioned that in order for him to overcome his dyslexia, he has to rewrite the text and recipes in the textbook. Just through his work ethic alone he has tremendous potential to succeed.