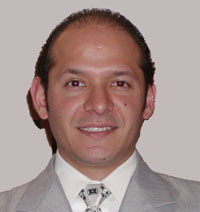 Though well educated, when Miguel Guarneros came to the United States in 2000, he spoke little English and had remedial reading and writing skills. He realized that without these skills he could not move forward in this country, so he started taking ESL classes at Riverside Adult School.

Miguel worked diligently to improve his oral proficiency in English and increase his reading and writing skills. After only a year of instruction, Miguel had gained the skills he needed to become an effective member of his community.

After completing the Advanced ESL class at Riverside Adult School, Miguel was able to pass two sections of the CBEST exam enabling him to work as a substitute teacher in his local school district, which he did for a year. He then decided to use his bilingual skills to help young adults in need; he became an interpreter at a shelter for runaway children. All the while Miguel was pursuing his career goal in international business. He is now Director of Latin Affairs for a company that develops computer software for governments. He works with high-level government officials and travels extensively in his role as liaison between his American company and Latin countries.

Miguel and his wife have recently purchased a home in Riverside. Miguel’s success is his reward for his unrelenting efforts. He plans to continue growing professionally with his current company. Additionally, he has plans to open a Mexican ice cream shop here so that he can bring the ice cream flavors of Mexico to America.