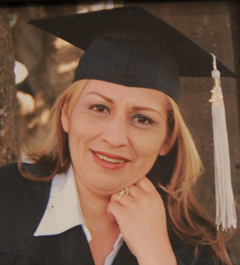 In order to pass the exams, Annette attended GED classes and then Distance Learning, studying both on site and off site, sometimes into the early morning hours. One of her goals, which she achieved, was to earn her GED before her son, the youngest of five children, earned his high school diploma in 2013. Devoted to her family, Annette says that it was “vital to be involved in my youngest son’s sport, and that required that I be out there on the field providing a cooked meal to feed the team. At this time my two young grandchildren, whom my husband and I are raising, were also out on the football field practicing with their teams. My main goal was to be present to them, and that included praying for them as they practiced their sport. I prayed that God would build their character as wise Godly fearing men.” After working all day, caring for her family and studying for her GED, after the house became silent at night, she never neglected writing to two of her children who at the time were in prison. She modeled courage, persistence, and goal setting for them, and today they are happy, peaceful, productive young adults.

Annette prepared for and passed the GED exams not only while caring for her family, but also while working 55 to 60 hours a week at Pájaro Valley Shelter Services, which assists homeless women, children and families to obtain stable housing through temporary shelter and services. She serves as program manager and also as a case manager working directly with clients, supporting them as they strive to end the causes and cycles of their homelessness. In her interactions, Annette helps clients restore their dignity, identify their barriers, and set goals. She provides families and individuals with tools to develop the skills and attitudes necessary to move on to stable housing and improved personal and economic self-sufficiency.

Annette credits adult education with supporting her as she gained the skills she needed not only in her personal and family life but also in the professional arena as she manages the program and advises and counseles Pájaro Valley Shelter Services clients. She says, “A dream that came about from my experience at the adult school was to have on-site GED classes at the Shelter, and my dream was realized this year. To gain my GED was one of the greatest goals ever that I wanted to accomplish, so that I could help others who were in the same boat. When I passed the last exam, math, I was able to encourage them, letting them know that not only could they persevere, but they could pass. In all integrity, I could tell them that if I could do it they could, too.” Not only did she inspire her family and the Shelter clients, Annette also was a major source of confidence building, peer support, and encouragement in her GED classes. To this day, former classmates who come back to visit often ask about Annette, inquire how she is doing, and remember the strength with which she inspired them.

Through the years Annette has earned the gratitude of the community, having been recognized for her many achievements. She has been acknowledged by the Soroptimists with their Women helping Women award; the United Way with an award as an Outstanding Agency Speaker and a certificate of appreciation for exceptional diligence and perseverance in the pursuit of services for the common good; the Women’s Commission of Santa Cruz County for being a Trailblazer in combating domestic violence; the Santa Cruz Private Industry Council for outstanding accomplishments in the community; and the Educational Partnership Center of UC Santa Cruz for her successful completion of the Parent Education Academy.

Annette says, “My self-confidence became stronger through this experience at Watsonville Aptos Adult Education. I thought I would not be able to accomplish this, ever! Modeling this to my children as well as to the population I serve professionally was very important to me.” Annette continues to look to the future with hope and confidence in her commitment to her mission of service to her family and those who are homeless in our community. Annette truly is an example of an adult student who has succeeded.