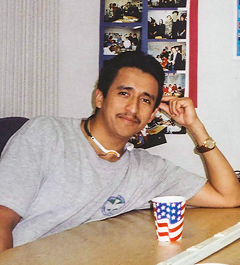 Margarito Contreras-Chavez had always dreamed of coming to the United States to become educated and to earn his high school equivalency. Shortly after arriving in the United States in 2002, Margarito managed to secure a job and began his American education journey as an ESL student at Roseville Adult School. He entered the ESL program in 2002, rigorously applied himself to his studies and graduated from the program in 2009. Wasting no time, he immediately entered the GED Program the next school year, and finally achieved his dream of passing the GED in 2013.

During his time as a student at Roseville Adult School, Margarito juggled significant life responsibilities. In order to remain in the United States, he maintained a part-time job. He needed a job in order to pay his bills here in the United States, but more importantly to Margarito, he needed to support his relatives at home as well. He was unable to work full time, and because he was an English language learner, he had to study for many hours each week in order to make progress. Therefore, Margarito maintained a very modest lifestyle while going to school.

Margarito not only enriched the lives of his family members, but he enriched the lives of other students around him by living the example of a dedicated student. He took his studies seriously, paid attention to the smallest detail of each subject, and practiced until he perfected each subject one by one until he passed the GED test. Although he was busy with his studies and work, as soon as he passed a section of the test, Margarito always took time out to help other students.

Margarito had almost completed his course of study when teachers and staff learned about his musical talent. "While he was studying and working," relates Katie Wodetzki, "he was also busy perfecting his musical ability as a guitarist and sharing that ability with other music lovers as a member of a local classic Rondalla (romantic style) 10 person guitar band."

Margarito has passed the GED with the help of his friends at Roseville Adult School, and he is still working to support himself and his family. He continues to play guitar for the same band, entertaining the local community. He is also working with volunteer tutors through the Roseville Library system to perfect his command of the English language, and occasionally stops by to visit his friends at Roseville Adult School, his "home away from home," to reconnect and inspire those who are continue with their studies. He is excited about his future possibilities and continuing his education at the local community college.