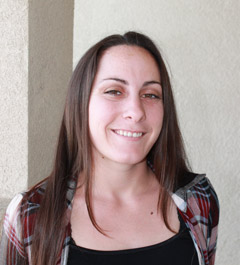 In the fall of 2012, a new student was welcomed into the Online Independent Study Program. Her name was Jacque Duncan. She was a resident at a local sober living home, and she came with the baggage that often follows those who are battling demons.

To describe her as reticent would be an understatement. She was quiet, guarded, and a bit mistrusting. She was living with strangers, in a different town, away from those who loved her and away from those who could hurt her. I can only imagine how frightened and alone she felt. Her start was rocky. She was impatient and easily frustrated by the different methods of learning independently. Eventually though she settled in and was attending school regularly. With her success, she began to gain a little confidence, and her smile became more and more frequent.

As her confidence began to return to her, she confessed that her young life had not been an easy one. She had wrestled with drug addiction off and on for years and, prior to coming to the Adult School, had been heading in a very dangerous and scary direction. She had lost friends to death and prison and she knew she had to make a change. As with many roads to recovery, there was a bump in the road. Jacque seemed to fall off the map for a few months, but thankfully, she got right back on track and from then on there was no stopping her.

As she continued to work toward her diploma she got a job at a local fast food restaurant. Her plate was full, but she seemed to just keep gaining steam. She was persistent and reliable in school and she was a trusted and valued employee at work. One year of sobriety passed, then another. She had taken her life back and it was evident each time she entered the classroom. Jacque was not only surviving, she was thriving.

Jacque took the last test needed to obtain her High School Diploma and it was another life changing event for her. She had reached a goal unimaginable to her only two years before. In May 2015, she walked across the stage to claim her prize, a piece of paper with her name on it that represents so much more than just a High School Diploma. For her it represents hard work, sobriety, determination, and most importantly, hope; which is all any of us can really ever ask.