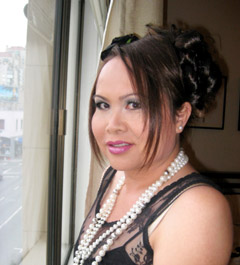 Crystal Montero was born in Savannakhet in Southern Laos. Growing up in a poor family, Crystal never learned to read or write in her native Laotian and never had the opportunity to go to school. As a transgender child, she was physically, emotionally, and sexually abused on a scale inconceivable in civilized society. Her family was condemned by others, thus making her childhood living situation even more adverse than usual. At the age of eight, she left her village to become a novice monk at a nearby Buddhist Temple. A year later, Laos fell into communism. In 1975, Crystal risked her life by escaping across the Mekong River to Thailand, where she stayed at a temple in Phitsanulok Province. At the age of 18, she decided to disrobe and move to a refugee camp in Ubon Province. She came to the United States in 1981 in search of better opportunities, a better life, and the freedom she longed for as a transgender person.

Crystal enrolled at Berkeley Adult School to study Business Administration, where she completed Business Communications and Job Preparation courses, improving her computer skills. Along the way, she achieved a long-standing life goal of greatly improving her English speaking, reading, and writing skills by taking ESL Classes. She feels it is a great honor to share her life story and how her life has changed after joining this wonderful institution. Crystal is a truly amazing and inspiring person whose dedication, hard work and outstanding ability have led to her success. These attributes will serve her well as she pursues a college education and ultimately her goal of becoming a public speaker. She wishes eventually to serve as a voice that speaks out for human rights and more particularly, denounces abuses against LGBTQI communities.

Crystal is strongly civic minded. She participates in many community activities, and has recently been hired by the Berkeley Unified School District as a proctor in the computer lab. Crystal appreciates the Berkeley Adult School for providing her with this opportunity and for getting her a step closer to her lifelong dreams.