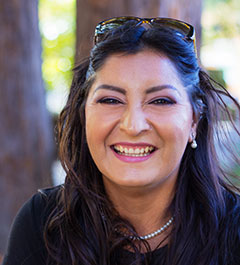 Grely Mazariegos is a very hard working individual who came to the United States from Guatemala. She worked diligently to learn English, first taking classes at the local community college, College of Marin, until she was able to speak English fluently.

As a young mother, Grely enrolled in Tamalpais Adult School in 2010. She had in mind the goal of completing the GED program and earning a certificate of completion. Making significant strides to improve her English language skills and excel in academics, she met her goal in May of 2012 when she passed the GED exam.

Grely now attends College of Marin once again and is looking forward to the day she is able to transfer to the University of California as a pre-med major. Her inspiration to embark on the difficult study of medicine comes from a disabled relative for whom she cares.

Grely has earned the respect and admiration of teachers and staff at the schools she has attended, and they proudly applaud her success and plans for the future.