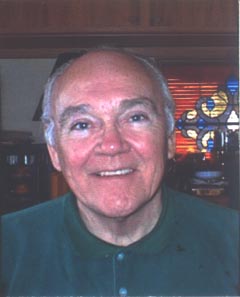 Amos Crothers worked for a food company for 46 years. When he retired in 1996 at the age of 65, he never imagined that he would start a new career. But, Amos says, “I knew if I didn’t keep busy after retirement I would be moving to the funny farm!” While looking for something to keep himself busy, Amos purchased his first computer in 1998. He knew computers were going to be the wave of the future and decided to go back to school and learn the skills necessary to begin a new vocation.

After struggling to learn how computers operate, Amos Crothers decided to sign-up for a computer class at South San Francisco Adult Education. It had been over forty years since he had been in a classroom when Amos signed up for Computer Literacy/Windows 98. In this class Amos learned how to turn on the computer, what to do when the computer freezes, how to find and delete unnecessary files your computer creates, and optimize computer speed earning Amos a Certificate of Completion after just one semester. Next, Mr. Crothers signed up for Computer Maintenance and Repair with Mr. Leroy Tolbert. Amos says, “After I took the class from Mr. Tolbert, I gained great knowledge and self-confidence with computers, which at one time intimidated me.” Amos continued taking computer classes and now feels extremely self-confident and knowledgeable about computers. He can now troubleshoot, upgrade, and repair computers. He can even build, reformat and reconfigure PCs. Amos credits Mr. Tolbert for helping him learn just about “everything I know” about computers and feels his experiences and exposure to South San Francisco Adult School have helped him come a long way from the first time he got a new computer.

Amos Crothers also volunteers his time at his community church where he has performed maintenance work, and hooked up computers. Most recently he helped set-up a computer lab for the Safe Harbor Shelter, a homeless shelter.

Amos says, “I made up my mind to learn, it was not as difficult as I thought it would be. I will continue to learn more and more each day just by exploring and experimenting with computers.” Amos is thankful to the South San Francisco Adult Education for developing his personal skills and the experience to help others, but most of all really making a difference in someone’s life.