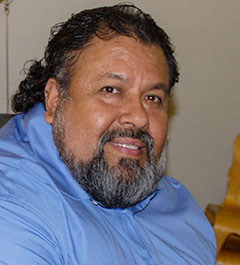 Originally from Jalisco, Mexico, Saul Godinez came to California in 1985 after completing his education in technical drafting engineering.

Saul is currently a Family Resource Coordinator with Canal Alliance

, a grassroots community organization in Marin County, where he began working in 2001. According to the Canal Alliance Web site, "He works directly with parents of students in the youth program, and also coordinates Familias Aliadas de Marin, a peer-counseling group and Parent Project, a parenting skill sprogram. He also particpates in the Thriving Families Initative, and is a recipient of the National Fatherhood of the Year award."

He is the father of four children, one who just graduated from high school with the class of 2014. Inspiration from his children and wanting them to complete their own education encouraged to Saul start taking GED preparation classes in August 2013. Completing a GED had been a goal of his for several years, and he was an eager and active participant at Tamalpais Adult School and in the GED Academy Program.

In addition to teacher directed instruction, Saul logged between 5 and 10 hours per week on GED Academy from home throughout the Fall 2013 semester. As a full time employee, father, and student, using the GED Academy from home proved to be a great benefit. In December 2013, Saul passed the GED exam.

"If it had not been for the GED Academy, I would not have earned my GED by December," says Saul, "It would have taken much longer."

Tamalpais Adult School was fortunate to be part of the pilot program through OTAN & Essential Learning that has provided 13 seats to trial with students through 2015.

Saul will begin community college classes in the Fall semester of 2014. He is a shining example of the students involved in adult education across California. Committed to life-long learning, dedicated to family, and determined to pursue their dreams.