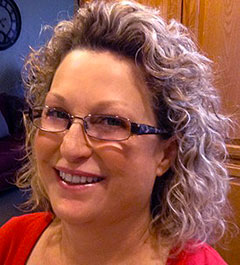 A native of San Diego, Barbie Bates, dropped out of high school. It was a decision she says she has always regretted. "I was a junior in high school and making some very bad decisions, ditching school, involved with a boy and not proud of my choices. Every year at graduation time I would look back at what I missed out on."

It wasn't until her daughter's father died and she became a single mother at 31 that she looked back on her life and, in her words realized, "I had done nothing with my life."

"I was a high school drop out, making minimum wage and no real career to be proud of, and that's when I enrolled in San Diego Adult Education classes," she wrote in an email for this story.

The school she enrolled in is Foothills Adult Center where she finally earned a High School Diploma in 1994. Attending adult school encouraged her to focus on learning and set educational goals. This helped her to transition to Cuyamaca College where she earned an Associate's Degree in computer information systems in 1999.

, in El Cajon. The Center serves nearly 400 individuals with developmental disabilities ranging from Down syndrome and autism to epilepsy and cerebral palsy and operates Sophie's Gallery and Gift Shop

. It was a way of giving back to her daughter, Shauna Davis, a student at St. Madeleine Sophie. Seeing how the Center helped her developmentally delayed daughter develop life skills, including earning a food handling license, Barbie decided she needed to do something. That something was to volunteer, even though she had no interest or experience in arts and crafts, she began spending four hours a week teaching students to make jewelry.

"Because she is the mother of a student, she is able to communicate with them in a way that helps them grasp different concepts," said Debra Turner, executive director of St. Madeleine Sophie's Center. "She is very creative, too, and she is always looking for new ideas. Sometimes I'll take some pieces (of jewelry) in and say, ‘Hey, can we make this?’ She is always ready to jump in."

When another jewelry instructor left the Center, gallery administrator Wendy Morris asked Barbie to take over. "I have to give a lot of credit to Wendy," Barbie said in an interview, "She knew I could do this, even if I didn't."

"I was so scared when they asked me to take over teaching this class, because I had never done anything like this at all," says Barbie. "The nice thing about this is that anyone can string beads. You can come in with no skills whatsoever and then you can put out a masterpiece. And they do!"

The one-time high school dropout who earned a high school diploma by going to adult school and went on to earn a college degree believes anyone can achieve goals. "In class, sometimes people will say, ‘I can't.’ And I'll say, ‘That doesn't work in my class.’ I'm the wrong person to say, ‘I can't’ to."

The Center hired a new full-time instructor, and though Barbie is still involved with the Center, it is on a less regular basis. "I have so much passion for this program because I know how important it is. It gives them the chance to express who they are. They are brilliant people, and they have such creative minds inside of them."

"Going back to school and getting my high school diploma was one of the greatest things I accomplished in my life," she says looking back. "I am so proud of myself and encourage everyone to finish school."