Hayward Center for Education and Careers 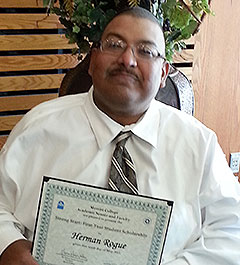 Adult education enabled Herman Roque to gain the skills to turn his life around. His reading, writing, and math skills all improved, and he gained self-confidence. It took him just one year to earn a GED®, and in that same year he earned a Microsoft Word Certificate. The skills he gained at the Hayward Center for Technical Education and Careers helped Herman become a successful student at Merritt College in Oakland, California, and to win the "Smart Start" Award and Scholarship in May 2013..

Here is Herman's story, in his own words.

"I was born in 1967. I had a happy childhood growing up in Hayward. My parents were always there for my sister and me. We were innocent kids who liked to go to parties. None of my friends took drugs until, one at a time, as kids do, we got curious about how they would affect us. Because no kid wanted to be the odd man out, a variety of drugs and alcohol eventually took over the neighborhood. Nobody ever pressured me; I drank and took drugs because I wanted them. I did not realize that I was becoming an addict as I watched my friends' lives be devastated by short, magical honeymoons provided by alcohol and drugs. Successful kids left the area; others ended up in jail or died.

"In 1987, I met my wife to be. She must have known I had a drug problem, but we never talked about it. In 1988, we had our son. We both worked. For more than 20 years I was consumed by the nightmare of addiction. I was what you call a functioning addict. I went to work every day, was involved in my son's Little League, and did all the things associated with normal family life. The thing that separated me from the other dads is that I was hiding a dark secret. Day after day, I would have to get back on a horrible roller coaster. I was not being the man I was supposed to be.

"In 2006, I was suffering from an intense backache, so I went to the ER. One doctor told me it was a muscle pull, another doctor thought it could be something else. He wanted to do more extensive testing, but I took the opinion of the first doctor and went home. Three days later, the pain worsened, so I decided to go back to the ER. Before I went, I wanted to take a shower. My legs felt weak, so I sat on the edge of the tub.

"As I left the shower, I had to put my hands against the walls to keep from falling. When I reached the foot of my bed, I collapsed. I remember waking up with a doctor hovering over me. He said "I'm sorry I had to pound on you, but it was to save your life." Then I realized, I could not speak. The reason for this was because I had had a tracheotomy, was paralyzed from the neck down, had respiratory and kidney failure.

"I spent the next year on a respirator in the ICU. The lowest point was at a family meeting when a doctor said, "You are not getting any better. You are going to die in this hospital. Do you want to continue dialysis, or do you want us to make you comfortable?" That was a very hard pill to swallow. A lot of things come to mind when you're facing imminent death. I thought to myself, "I had better start writing my will." The most disheartening thing about that was it would be very short. I had not begun to do many of the things I wanted to do. I assumed I had more time. What I should have thought was, the time for change is now. It was then that I realized that I was no longer the prisoner of any substance. Never again would I put my family or myself through the horrors that come with addiction. I….WAS….FREE!

"I realized that all I had to do was get myself out of the hospital. It turned out to be easier said than done. The road to recovery has been very long and hard, but through intense therapy, I have been able to regain movement and sensation in most of my upper extremities. I have even been able to breathe on my own. After two years and seven months, I was discharged. Even though I was in a wheelchair and have had to continue hemo-dialysis — I was alive. I know that the worst day at home is better than the best day in the hospital.

"Now, the real work would begin. I told myself that if I was fortunate enough to leave the hospital, I would not let this ordeal be in vain, so I decided to help prevent what happened to me from happening to others. I started by earning my GED. Then I enrolled in Merritt College where I have a 3.33 GPA. While I am here, I am trying to enjoy the journey. I discovered that I like learning. I have found that in education I feel whole. I feel that the people here understand me. They do not see me as an addict or even a man in a wheelchair. They just see me."

Herman now works as an intern at a counseling center. It was his own personal strength and determination that encouraged him to keep moving forward. Adult education was there to provide opportunity. "I have a long way to go," he says, "but I know I will get there."

Someone once told Herman, "there are three things in life that every person needs; some one to love, some thing to do, and some thing to look forward to." He adds, "Now I have all three. Finally, I am being the man I was supposed to be."