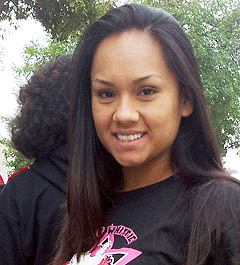 Learning never came easy for Cindy. Early in elementary school, she was diagnosed with a learning disability. Pulling her out of class for the needed extra academic support embarrassed her. She felt ashamed of her disability. She felt like other kids thought she was "dumb," so to cope she began acting out and drawing negative attention. By the time she was in junior high, she had joined a "crew" and began tagging things with graffiti. Time spent in a juvenile correction facility was the predictable outcome of her bad choices.

Cindy's academic struggles continued as she started high school. Her self-esteem plummeted, and by tenth grade she had joined a gang and become addicted to methamphetamine. She was in and out of jail, and her addiction worsened. Caught stealing and in possession of drugs and a gun, Cindy was once again sent to prison. This time the sentence was longer.

By twelfth grade, Cindy was a full-blown addict, but the principal of Shurr High School in Montebello saw something special in Cindy and refused to give up on her. She called Cindy into the office many times, to counsel her, to make sure she kept up with her school work, and to encourage her to finish high school. She did, and finally received her high school diploma.

Addiction is a cruel task master. It demands everything from us, gives nothing in return, and refuses to step aside. After high school, Cindy's cruel addiction consumed her life. She spent her days living on the street and her nights crashing in a crack house. Homeless and addicted to drugs, she became pregnant.

During her pregnancy, Cindy somehow managed to stay clean. She delivered a healthy baby girl. But the cruel addiction refused to stay away and after the baby was born her addiction returned. Threatened by a judge with the loss of her daughter to the foster care system, Cindy entered a rehabilitation program hoping to straighten her life out. It was an opportunity from the judge to keep her daughter, and the dose of reality Cindy needed.

Cindy went to a facility called The Foley House where she received emotional support, counseling, and help to overcome her addiction. She decided she wanted to be clean. She decided to make a life for herself and her daughter, a life of which both of them could be proud. Her determination helped her to do so well at the Foley House that she was granted the opportunity to stay at the Salvation Army's women's shelter for two years after. Here she could get an education, continue her recovery, and learn life skills.

This is when Betsy McKenna, a teacher at Whittier Adult School, met Cindy. Cindy excelled as a student at the adult school. She earned 13 certificates and successfully completed her two years at The Salvation Army. She now has her own apartment that she shares with her beautiful daughter. She has a full-time job at an air-conditioning company, and she is thriving. The job skills she learned at the Whittier Adult School have provided her with the education she needed, and the up-to-date skills required, for her to be successful in today's job market.

After four years of being drug-free, Cindy's self-esteem is at an all-time high. She now embraces her learning disability and realizes that she needs to put forth extra effort to succeed. She accepts it as a challenge.

"Cindy has a bright future ahead," says Betsy, "and is an inspiration to everyone who knows her, especially all of her fellow former students."