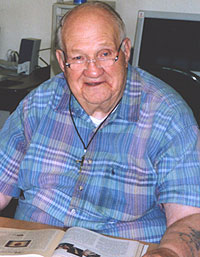 Born in 1922, Claude Vanover spent his early years alone and unnurtured. "I didn't have a family," he says, but he does remember being in and out of an orphanage. Having no one to care for him and no home to go to, Van would sleep wherever he could, in fields, in bus stop covers, and — when they would let him — in jail.

In 1939 Van’s life took a turn for the better. After a sporadic and scattered education that brought ridicule and feelings of always being picked on, Van dropped out of school and joined the National Guard. He was seventeen and in the sixth grade, and whatever he had been doing up to that point wasn’t working. War soon broke out and Van, getting caught up in the excitement that swept the nation enlisted in the Army in 1941. He was sent to the Persian Gulf Command to work on the Russian supply line across Persia. He didn’t know it at the time, but the Army would become a turning point in his life.

Having plenty of free time, Van would spend much of it between meals at the mess hall sitting at a table and talking to anyone there. One day, someone offered to teach Van to read and help him learn English and math. Because of that offer, Van earned his GED while in Persia. (He says that it was much easer to pass the GED back then!) Van was in and out of the Army two or three times after that, always going back for the camaraderie, an antidote for his loneliness. The Army had become the family he never had that encouraged him to continue his education.

And continue his education is exactly what he did. During his enlistments in the Army, Van took advantage of many educational opportunities. Military Intelligence School helped him to become a language analyst, and after studying Japanese for eighteen months at language school (now DLI), Van served in Japan as an interpreter.

In 1951 he married Mary and had a daughter. While working as a custodian for the school district, he decided that he wanted to become a teacher and started going to Monterey Peninsula College after work. After earning an Associate's degree he was given a 4-hour class working with Special Education Students. After two years of teaching, Van went back to the custodial position from which he retired after fourteen years due to a heart attack.

His most meaningful position was working at Natividad Residential Care Facility in Salinas from 1993 to 1998. He enjoyed helping people who truly needed care. Though the people there had most of their physical needs met, Van helped them with many other concerns. With great enthusiasm he tells how he helped an aging veteran obtain insurance coverage for expensive medications that he didn't know he was entitled to, and of the dying woman he sat and talked with who told him "you're a good person" simply because he had time for her. He enjoyed helping people who truly needed care. He didn't do these things for the pay, there was none. "I did it because I enjoyed doing it," he says, "I've done a lot for myself, but this was a case where people were dependent on me." Van believes that the good we do for others always returns to us.

Van came to Monterey Adult School in August 2002 to learn basic computer skills. When he saw other students working in books, he wanted to know what they were doing. Discovering that they were working on high school diplomas, he decided he wanted that too. He devoured the books, made good use of all the resources available to him, and would often stay in classes for six-hours a day, leaving tired but satisfied that he was doing what he loved to do — learning. He would even work in class and at home during weekends and holidays so he could fulfill his goal of completing his diploma before his 81st birthday, which he did. But, because learning is a lifelong process and he loves school, Van plans to stay in school as long as he is able.

Van has had problems in life, but he has never given up. Spells of dizziness, having to use a walker, and profound deafness have made learning difficult, and a regular classroom doesn’t work well for Van. Frequently, reading material is enlarged and darkened to make it easier for him to read. But he enjoys working at his own pace, getting help when he needs it, greeting the young people in the classroom, and visiting with the older adults in the room. He doesn’t plan to ever stop. He wants to leave a heritage for his grandchildren, to show them that it is never too late to achieve what is important to you. One of his most recent projects was to help his wife study for and pass the citizenship exam and become an American citizen. His latest undertaking is to learn Microsoft Word XP.

In June 2002, Van was recognized and honored as Monterey Adult School's most senior graduate at their "Celebration of Success" ceremony. He achieved his goal and completed the requirements for his diploma, but still comes to school at least four days a week using the Rides Program because he no longer drives. He stands tall as an outstandingly positive role model to all who doubt the value of education. He plans to continue his education as long as he is physically able because he loves learning. This man with his indomitable spirit is a wonderful role model for all of us and a testiment to life-long learning.