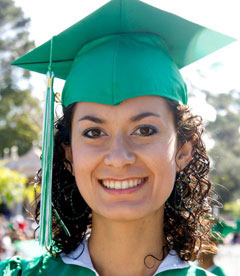 A math teacher from Ankara, Turkey, Nesem "Joy" Mergen moved to San Diego, CA in 2006. She was alone and struggling, working fifty-five hours a week at three jobs, and having no days off for months at a time. She found her greatest support coming from teachers and classmates at San Diego Community College Continuing Education (SDCCCE) where she was pursuing a career in nursing.

Joy's pursuit of a career in health care was thrown off course by her lack of English writing and pronunciation skills. Frustration and disappointment over her inability to communicate in written English was a frequent visitor. She spent hours toiling over essays for the English as a Second Language (ESL) transition to college class and the Test of English as a Foreign Language (TOEFL) preparation class. Navigating the educational system was complicated and confusing for her. She worked forty hours a week and went to school thirty hours a week. When she saw that many of her classmates were unable to pass the GED or college placement tests because they lacked math skills, she began tutoring them. This took up most of what little time was left during the week.

Joy took adult education classes from 2007 to 2011 at SDCCCE. She completed a full program of classes, and in June 2011 was certified to be a Nursing Assistant. She then enrolled in San Diego City College's Registered Nursing (RN) program, and in December 2011 was employed as a Technical Partner, another name for Certified Nursing Assistant (CNA) at Scripps Mercy Hospital.

Joy has made many positive contributions to the community. Responding to an increasing occurrence of diabetes in the community and among her classmates in the spring of 2012, Joy, along with a physical education instructor at City College, created "Team D" (Team Diabetes). She created fliers, set up a Facebook group and recruited students in college and adult education classes to join. With the help of others she posts events, workshops, videos, and classes on diabetes awareness, exercise, and food preparation specifically for diabetics. Joy is reaching out to the growing number of people who have this disease and is offering education and exercise to help them cope.

Joy is a true believer in the philosophy of giving back. She appreciates the education she received from adult school, and as a way of showing her appreciation, she volunteered in the VESL Personal Care Assistant class in the fall 2011 semester after she became a Certified Nursing Assistant. She helped the registered nurse instructor in the class demonstrate some of the technical skills to current VESL students. Her willingness to take time out of her busy college schedule was greatly appreciated by the teacher and students. She was a motivating force and role model to the students. "Last year, I was sitting where you are sitting now," she would tell them.

With the help of SDCCCE, Joy has met several of her life goals and established some new ones. When she started taking adult education classes in 2009, she knew she wanted to be a health care professional, but had no idea how she was going to achieve her goal. Now she is working as a health care professional and attending college. She recently decided to go to medical school and become a physician.

Joy admits she doesn't know where she would be now if adult education had not been available to her. She is extremely grateful and shares her experiences with friends and family and people in the community who might not have known about adult education, and now they are attending classes in pursuit of their dreams. Joy has been a fantastic voice for adult education.