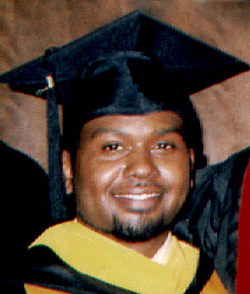 When Travon Willis was only ten years old, his father died while in prison. When his mother became addicted to drugs and was no longer able to care for Travon and a sibling, his grandmother stepped in and raised them. At nineteen years old, before graduating from high school, he got married.

At the age of 26, Travon started working toward a high school diploma at Fremont Adult and Continuing Education (FACE). He has always believed this was one of the best decisions he ever made. In the two years he attended, 2004-06, he overcame poor grades and moved from the freshman level to attaining all the credits necessary to complete the program and earn his High School Diploma. He also won an Academic Achievement Award in Math and the Community Advisory Council Scholarship.

As part of his undergraduate studies, Travon was involved in two internships. He co-facilitated substance abuse counseling at the Latino Commission, and was a tutor at Centro de Juventud in Oakland.

Travon credits FACE with instilling in him the intense desire to be a father, husband, and friend, and with equipping him with the tools he needed for future success. He is in a doctorate program for Clinical Psychology at John F. Kennedy University, and maintains a 4.0 grade point average. Part of his program includes a practicum/internship, which he completed at a middle school working to build the self-worth of under-privileged youth through conflict management and positive reinforcement. As he works toward his doctorate in psychotherapy, Travon plans to volunteer for a suicide hot line at Crisis Support Services of Alameda County with the long-term goal of opening a rehabilitation facility.

Regardless of all his educational accomplishments, being a positive role model to his family is the most important thing to Travon. His career is about helping people, and he believes he has an ethical and moral duty to provide them with his best care. One example of this comes from outside his work.  Travon possesses a compassion for homeless people, and each Thanksgiving and periodically throughout the year he and his wife collect used clothing which they distribute to homeless people in the area. From this and other examples, his family has gained the same ethical and moral sense as Travon, along with the understanding that each one of us plays a part in contributing to a better tomorrow.