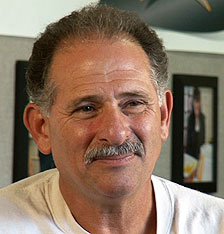 Joe Grinnell was born in 1955 to hard working parents in San Fernando, California. Gang influence, questionable friends, bad attitudes, and tough schools all played a part in what influenced Joe as he was growing up. It wasn't long before he was "dropping downers, smoking weed, and using pain pills as a crutch." School was not something to be taken seriously, and after a physical encounter with one of his teachers during his Junior year in high school, he was expelled.

Joe moved to the North Shore of Lake Tahoe and began to realize that there were beautiful areas of the state which were not infested with gangs and drugs. Still, complete isolation from drugs and alcohol, was impossible to achieve, and the abuse continued. Expulsion wasn't going to happen this time. Instead, Joe dropped out of high school forcing himself into the work world. To get a job, he lied about his age so he could become a carpenter's helper. He kept at it for four years, and the substance abuse continued. He married. It was the first of three. She was an alcoholic, and the marriage failed miserably. He found a job that "went nowhere." Two prison sentences preceded his using methamphetamine and eventually heroin. And the drinking continued.

Eventually, Joe started to turn his life around. "He didn't crash and burn," writes Tim Kelly, Principal at Marysville Adult School. "Joe found the influence of his creator, or his creator found him."

First, he became clean and sober. Then he realized "he had a burning desire to minister to others in correctional facilities." He got the opportunity and started at the Gonzales Maximum Security Juvenile Facility. Later he volunteered as a chaplain at the prison in Susanville, CA, worked in many outreach programs and now has a clear path to becoming a pastor with the Nazarene Church. The only hurdle was earning the required GED.

Joe decided to enroll at Marysville Adult School. There he found phenomenal support to help him stay focused and moving toward his goals. The two secretaries in the office never failed to encourage him when he re-registered over the course of his studies, teacher Billie Shurtz helped him conquer the challenging math course, and Principal Tim Kelly provided motivation, direction, and a fresh vision. His peers also provided moral support and help along the way.

Joe continued working full time as a plasterer while going to school, and on June 6, 2011, after four years, he walked across the stage as a graduate. He gave a motivating speech and walked away with a GED and a genuine sense of accomplishment. He continues to work on his ultimate goal of becoming a pastor and actively works in several recovery and outreach programs in Northern California. On top of it all, Joe is still working full-time as a self employed plasterer.

Joe has succeeded and will continue to succeed. There are many who will readily testify to his strength of character, strong marriage, and loving relationship with his wife and three children. A life pulled from a pit is now set upon a rock and rests on a firm foundation.