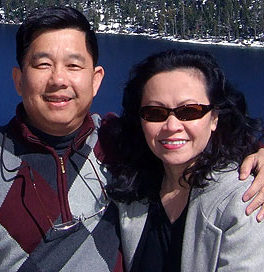 Ken Nguyen and his wife, Myhau Phan, epitomize why adult schools are a necessary part of California's public education system. Vietnamese refugees, they arrived in San Jose in December 1985 with their two-year-old daughter, Phuong. Ken's brothers, who already lived in the area, gave them support and helped them enroll in adult education so they could improve on the English they had learned as students in Vietnam and while living in a Malaysian refugee camp.

Ken and Myhau's journey began in Vietnam with Ken's refusal to join the Communist Army's fight in Cambodia. For the next four years, they were forced to live a secretive life that often left them homeless. In February 1985, they were able to escape Vietnam in a small boat over-crowded with other fleeing refugees holding on to the hope of finding a better life. It was a harrowing experience that put them constant danger of sinking or being captured by Viet Cong patrol ships. Predatory pirates roamed the South China Sea in search of helpless refugees, presenting an even greater danger than the Viet Cong. Ken, Myhau and their companions survived two encounters with pirates. Ken recalls the pirates stealing what valuables the 43 passengers had during the second encounter. They were lucky. It would have been of little consequence for the pirates to physically harm, maroon on a deserted island, or even kill the passengers and crew.

Ken and Myhau arrived in California almost a year later, and both will tell you adult education played a critical role in getting them to where they are today. They attended classes every morning at a school across the street from their apartment. They felt fortunate to be able to walk to school, having no other mode of transportation, and they appreciated the free child care the school made available for their daughter. The school was "like a family for us," says Ken, and bonds with other immigrants facing similar challenges were quickly developed. Adult education, says Ken, "gave us comfort and security before we were able to take the next step." That next step was college and employment.

Ken is very thankful to be a U.S. citizen and boasts that the U.S. is the "number 1" country in the world. He appreciates living in a nation where one is rewarded for leading a virtuous life of hard work. "You deserve everything you earn in the U.S., which is not the same as in other countries." The foundations of Ken and Myhau's lives are family, education, hard work, and honesty. They are proud that these values have led them to success in life and appreciate the investment the U.S. made in them as refugees: one year of subsidized housing and welfare, free adult education and child care and low-cost college. That initial investment, Ken says, has been repaid 100-fold in the taxes and the wages he has been able to pay his employees as owners of a business, Furniture USA, in Sacramento.

Their daughter Phuong (Patty) and son Nam have also been successful. Patty is a high school ELA/ELD teacher in West Sacramento, and Nam lives and works in New York City.