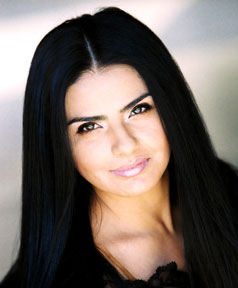 Aliona Holloway put herself on a fast track to success in the United States and credits Oxnard Adult School with helping her achieve many of her major goals. She was born and grew up in Moldova when it was part of the Soviet Union, became a cosmetologist, and moved to Germany when she was 29. The following five years was spent working in Munich.

Aliona met her future American husband vacationing in California. As their relationship developed, she hired an English tutor to begin learning her third language. She came to live in the U.S. in November of 2004, got married and soon enrolled in ESL at Oxnard Adult School. Constantly studying English, she came to class each day with a list of vocabulary items to ask about. In her daily routine she would find words and phrases from magazines, newspapers, TV and movies that piqued her curiosity. With persistence and enthusiasm described as contagious, she encouraged and supported her classmates and created an energetic learning community.

The California Cosmetology License exam was a big challenge. Although she had years of experience as a hair stylist, the California exam requires extensive knowledge of product chemistry and sanitation practices. After trying poorly-translated Russian and German study guides, Aliona studied for the exam in English. She passed the exam in May 2007, just two weeks before she delivered her daughter, Sasha.

Aliona got her first job in November 2007 and now has her own station at a local salon. In the summer of 2008 she added a second career, designing natural stone jewelry. She markets her pieces as "Sasha's Treasures."

Aliona became an American citizen in October 2010. She focuses on her family and career as a hair stylist now, as well as her jewelry business. She continues to improve her English and always encourages newcomers to sign up for ESL classes where, she proudly says, she acquired the language skills she needed to succeed in her new life in the U.S.