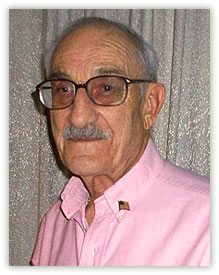 Frank Ganz's wife, four children, twelve grandchildren, five great grandchildren and one great-great grandchild, celebrated with "Papa" when he did what he had always told them to do: graduate from high school! Frank at 83 and 1/2 years of age was awarded his long-delayed diploma on June 17, 2009 through the Metropolitan Adult Education Program (MAEP), Metropolitan Education District, San Jose, California. This graduation ceremony was filled with excitement as two local TV stations reporters interviewed Frank. After achieving his life-long goal he told the public, "Inside it always burned that I didn't finish. I was always embarrassed. It bugged me all of my life that I did not have my high school diploma."

Frank's strong work ethic had its beginnings when he went to work in a candy store at the age of 13. At 15 he sold newspapers for three cents each, and worked in his brother's auto repair garage for ten dollars a week. During the Great Depression, he went to school for a day or two a week, until joining the Navy during World War II. He was only 16, and had to change his age on his birth certificate. A change that was so obvious, he dropped the certificate in a puddle of water in the street and stepped on it to make it less noticeable.

Frank returned home after four years, met a woman named Angelina, and five hours later asked her to marry him. "She didn't say nothin'," recalls Frank. Angelina finally did say "yes," they married, and had four children. He worked in auto part sales in New Jersey for the next twenty-two years, and opened his own business after moving to California in 1968. Frank and Angelina were married forty-five years until she died in 1991. He retired from the auto parts business in 1994.

Frank met his current wife, Laverne, 81 years old, at a fitness club in downtown San Jose a few years ago. In a recent phone conversation, Frank said he still works out at the club, "never less than four days a week."

As Frank watched his grandchildren going off to college, he made up his mind that he was going to finish his education. "I'm going to do it!" he exclaimed in similar fashion to the well-known phrase, "just do it!" in an ad for sports apparel. He walked into the offices of the Metropolitan Adult Education on August 11, 2004 and signed up to begin earning credits through the Independent Study Program (ISP).

Frank had three wonderful teachers during his four years at MAEP. "This is easy, I lived it," he said of his U.S. History classes. In one of his English courses he wrote an essay on discrimination. His father, of Russian-Jewish descent, came to the U.S. in 1905. Frank describes walking down the street with his "Bubbie" who was wearing her babushka. He proudly held his Grandma's hand as some people, even children, on the porches made fun of her. "Discrimination will never go away" Frank observes. "Let it ride. There are too many good people; for every one person that does discriminate, there are hundreds that don't."

"The toughest part was when I got to algebra," says Frank. "The concept of algebra just threw me."

Frank regularly promotes the Independent Study Program. His latest convert is his daughter's housekeeper whom Frank provided with the information she needed to sign up for classes provided through MAEP and complete her high school diploma.

His message is that the MAEP program can fit everyone's time schedule. Students drop out of high school and take a job that will pay for their immediate needs, but when they get into their twenties and thirties, they think it is too late to go back and finish. Frank said that if he was standing in front of these young people, he would say, "You can make things happen and there is no excuse. MAEP has hours to accommodate every student. You can always find a way. Move projects around. Sacrifice for a couple of years for your future. You tell the counselor what hours you can come and she will make a program for you."

Frank's picture and an article from the San Jose Mercury are displayed in the ISP classroom and continue to amaze and encourage students to persevere. One current student, Emma, has Frank's story next to her high school ring on her dresser at home to motivate her to come to school every week. She has pawned all of her jewelry, but kept her graduation ring from when she was 17 years old. She will wear it with pride and surprise her family when she graduates.

Frank's photo is in the Fall Class Schedule that goes out to 185,000 homes in Santa Clara County, and his story about his fulfilled dream will continue to inspire and motivate through the YouTube video "You Are Never Too Old to Graduate from High School." This video, along with two news videos of his graduation from MetroEd, is on the MetroED website. His story was also carried in USA Today and many other smaller publications, even a Chinese newspaper.

Frank was awarded the Class of 2009's Life Long Learner Award for his perseverance and attitude, and has plans to continue his education. He is interested in taking a Spanish class through adult education. MetroEd also plans to ask Frank to be a motivational speaker in their High School Subjects classes.

Frank's MAEP tutor, Tom Heim, sums it all up, "Anyone who's willing to keep learning at 60 or 70 or 80 years of age should inspire all of us that we still have something to contribute no matter how old we get."