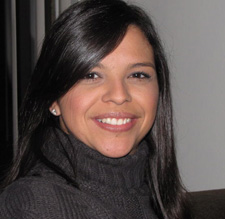 Thatiana Cruz came to Riverside Adult School in 2000 at the age of 19. She came from Brazil with the hope of starting a new life in America. A life she hoped would give her better opportunities as she sought a career in film and television.

She knew only a little English and quickly realized she needed to improve her language skills before she could do anything else. A dedicated student, Thatiana's skills improved greatly in the short year and a half she attended Riverside Adult School. She completed the Advanced Level of ESL, and knew she was ready to take the next step toward her goal.

That next step had Thatiana enrolling in Riverside Community College. She had to work harder than her classmates, but through her continued dedication she earned, not one, but two Associates Degrees. One was in Basic Television Production, the other Film, Television and Video Production Specialist. By now Thatiana had a good handle on English and realized she could be successful at a four-year university. In 2007 she earned a Bachelor's Degree in Radio/TV/Film from Cal-State Fullerton.

Throughout her seven years of education at the three schools, Thatiana faced challenges. At one point, her father was moving to the state of Washington and Thatiana had to decide if she was going to stay behind and finish her education or follow her family. She decided to stay, rented a small room, and worked at a restaurant to make ends meet. During her spare time, she came to the Adult School to volunteer as a Teacher's Aide in an Advanced ESL class. This gave her a chance to practice her English and to give back to the school that started her toward her goal.

Thatiana's college graduation was both exciting and a little frightening. Faced with the decision of what to do next, she moved to Los Angeles to make it easier to pursue a career in her new field. Her resume has grown impressively since earning her degree. She has worked on three films for an independent film company (Raw Feed Productions), one pilot television show for the CW network, several dance shows for MTV, and currently is a Production Coordinator at GoTV Networks. Her career is looking bright!

When she's not working, Thatiana participates in Youth Outreach (Outreach Justice) at her church in Los Angeles and is involved in promoting well-being for children in both Riverside and Los Angeles.