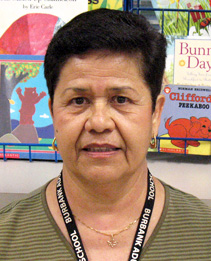 Socorro Avila moved to Burbank, California, from Mexico in 1968. She enrolled in Burbank Adult School's ESL parent education program with her two sons in 1971. In 1972 her third son was born and also became a part of the program. A few years later, she started volunteering in the program, and in 1974 became an instructional aide, starting her long career as an ESL aide in the childcare program.

Socorro has remained part of the BAS family as an employee for over 30 years. During her tenure at BAS she branched out and added a second job as an ESL Office Specialist. In this capacity, she has served as an evening coordinator at the ESL office at Burbank High School (a satellite campus for ESL classes) for over 15 years.

Wearing two hats for BAS in her roles as a parent education aide and as an ESL office specialist, Socorro has always been cheerful and helpful to all of the students. Socorro became the heart and soul of the ESL program at Burbank High School. She has always been well organized and has assisted in running an outstanding ESL program for the evening students at Burbank High School. Socorro has consistently gone above and beyond her job description to create an atmosphere of learning, pride and joy with the students and staff she comes in contact with. She offers encouragement to students and inspires them to pursue their dreams with her energetic and positive spirit.

Socorro has always been in charge of the Student Council at Burbank High. She runs fundraising efforts involving the students, and every year helps to put on an International Night where students share food, artifacts and music from their heritage countries. When a party is planned, Socorro makes sure that all students participate and have a good time. She has helped to create a closely-knit community of learners at the Burbank High location.

Never satisfied with the status quo, Socorro has continued her quest for life-long learning. Last summer she completed one course in Child Development and is taking a second class now. She has also been attending a state offered training called, "PITC – Practice," a Program for Infant/Toddler Care Partners for Quality, which carries with it an 18-month commitment. She meets every challenge along the way with a smile and a positive attitude. Socorro's work ethic serves as a model for other adult education students to complete their educational goals.

Socorro says that her experience as a student at BAS created a strong passion for the value of adult education — so much so that she has worked for the Adult School for over 30 years. She feels this is a special place with great instructors and support staff, all of whom are committed to student success. Although Socorro retired this year, she still works in the mornings in the child care program and makes visits to the Burbank High School evening classes to spend time with the teachers and students she cares so much about.