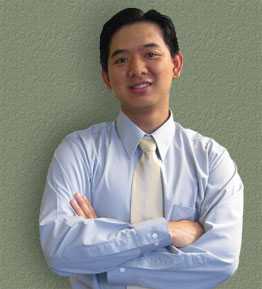 Chuong Nguyen came to San Diego in 2002 and immediately enrolled in the English as a Second Language program at North City Center for Continuing Education. After completing English Level 5, he was promoted to an advanced class.

With the help of the program's counseling services, Chuong applied and was accepted to San Diego Mesa College where he earned an AA degree in General Education. Following the advice of a relative who is a radiology technician, he decided to apply to Mesa College’s radiology program. After being on the waiting list, he was accepted into the program in 2008 and has received excellent grades, as he continues taking summer classes.

"He has since been thriving in the program," writes Mimi Pollack in an article on the Mesa College Website.  "This semester he won 3 of 5 scholarships he applied for. He was a finalist in the New Americans Immigration Museum and wrote one of the winning essays!"

This wasn’t Chuong’s first essay. In 2006, he wrote a winning essay for the New Americans Immigration Museum. It was about the sacrifices his mother, who was also an adult education student, made for him, so he could have a better life here in the US.

Chuong has always worked to help with school and family expenses, even while going to school. In addition to hours spent studying, he would often work 20 or 30 hours a week.

In September 2006, Chuong applied for an Instructional Assistant position at the North City Center. He worked in the computer lab with instructor Jane Uhle. "He has been an outstanding aide: always patient, punctual, with almost perfect attendance," says Ms. Uhle. "As a matter of fact, he was absent only twice that I can remember." One time was to help a friend get to a site to take a California State licensing exam in her field, and another to attend a dinner in his honor as the recipient of three achievement awards from Mesa College.

When he completes the radiology program and passes the California State exam in radiology, Chuong’s goal is to work in a hospital or health facility in his home town of San Diego.

"He's a hard worker with excellent focus," says Ms. Uhle. "I trust he will realize this goal."