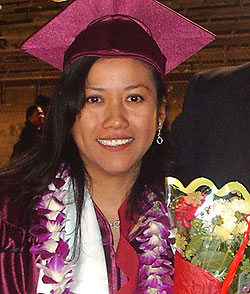 Gloria Martinez graduated from Baldwin Park Adult and Community Education (BPACE) on June 11, 2004 with a High School Diploma and has been an inspiration to many of her classmates. Immigrating to the U.S. at age 16 with husband Daniel and year-and-a-half old daughter Karen in 1998, she had only completed through grade six in Mexican schools and had no high school. Her family had been too poor to think about education beyond Gloria’s.

Gloria came to BPACE in 1999. "She started out as a very shy soft spoken young girl," says teacher Larry Wadahara. She enrolled in ESL classes with Jennifer Martin. Moving very quickly through the ESL program she took the advanced ESL course with Irma Sanders in the summer of 2000. She transferred to the ABE program with Debra Jensen in 2000, for two semesters, and in 2001 started the High School Subjects program. She graduated third in her class within three years of entering the High School Diploma Program, and received scholarships from the Baldwin Park Organization of Supervisors and Administrators (BPOSA) and the California School Employees Association (CSEA). She was also one of the winners of the Baldwin Park Adult Essay Contest, winning in two separate years for the ABE and High School Diploma Programs.

Throughout her schooling at BPACE, and later at Mount San Antonio College, Gloria has been supported by husband Daniel and, now 12-year-old, daughter Karen. Karen attends Jones Junior High School and is enrolled in the GATE program, taking Honors classes, and doing very well.

Following graduation from BPACE, Gloria enrolled at Mount San Antonio College (Mt. SAC). She has maintained a high grade-point average, and has received several scholarships for Personal Achievement and Outstanding Academics. Accepted into the Mt. SAC Honors program in the spring of 2006, Gloria has been on the Dean’s list for "quite a while." In 2007, she received Mt. SAC’s Student of Distinction Award, one of the highest honors given to students at the college. She has participated in the Bridge program as both a participant and later a peer advisor, and is very grateful for this program which helps students transition from High School to College. As a student advocate, Gloria wants to set up a scholarship to help other students at the Adult School and college programs and wants to help others like her continue their education.

In the midst of all this, Gloria recently took some time off, not only for herself, but to raise her new baby girl, Denese Bahena Martinez, born on December 3, 2007.

Then, in April 2009, Gloria was back to it. She won an essay contest sponsored by CATESOL. The topic was an ESL teacher who inspired them to be somebody. This year, Gloria has given inspirational presentations to the Bassett Adult School and BPACE programs. She was also the inspirational speaker for the BPACE ABE awards in June. She amazed all the honored guests with her achievements and was invited by the mayor of Baldwin Park to share her story at a city council meeting.

Gloria graduated from Mt. SAC on June 12, 2009 and received one AA Degree in Communications and another in Mathematics. She also received several scholarships from Mt. SAC in the areas of Mathematics, English Excellence, and Accounting. She was especially proud of the award in English, since it is her second language. She also received the R. H. Benbow scholarship from the Adult School, which is awarded to graduates from the Adult School enrolling in higher educational programs.

Gloria will start at Cal Poly Pomona as a Business major in the fall of 2009. Her goal is to become a Certified Public Accountant. "She is a very hard working mother and student who will continue to give back to her community in many ways," says Wadahara. "Her goals are high, but she has the confidence and ability to complete whatever she aspires to. Although she has not yet completed all her educational goals, she has already shown that she can overcome adversity and has sought to help others by lending a hand and sharing her experiences."

"Her accomplishments and changes, throughout the years that I have known her, have really inspired me to keep taking personal interest in all my students," Wadahara continues. "To see a young, shy girl face adversity and turn into a very positive and confident young woman has been truly amazing."