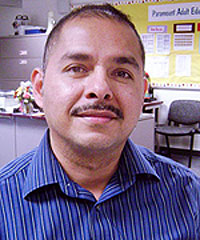 Isidro Morales moved to Paramount from Mexico when he was nine years old. "All the changes — including learning a new language — were difficult. But I graduated high school on time, got married, and started a family," says Isidro.

"My wife and I realized that we needed to better our education to succeed in life, not only for ourselves and each other, but also for our little sons and daughter."

Isidro was working a graveyard shift when he began studying at Paramount Adult Education Center. "I still remember it was very hard to stay awake all night and attend school at the same time." He soon found out that the late night to early morning work schedule wasn't for everybody. It took a lot out of him. "I fell asleep in one of my really nice teacher's classes one day," he remembers. "It was tough, but I knew I had to keep at it, I had to make it happen."

After a year of struggling to balance working the graveyard shift and succeeding at school, Isidro applied to be a substitute clerk typist in the Paramount Unified School District in 1996. As a substitute, he worked at all the different school sites, 16 of them, and realized he was using skills learned in his adult education classes.

"It was — and still is — very exciting. Why? Because I began to meet people that I still know and work with, and I'm still going the extra mile to help students. You see, I'm learning every day after all these years, and I'm back at the adult school, working here now and helping other people in my community do just what I did.

"They're pursuing their dreams and goals; they're bettering their education and their lives. And I'm helping them do it, answering their questions, making sure their teachers get paid, and helping out any way I can.