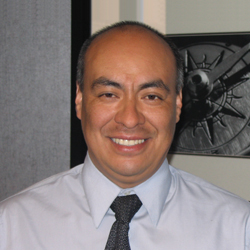 In 1991, Rigoberto Alvarado left San Vicente, El Salvador and came to Oakland looking for a better opportunity to live and give economic help to his family.  They were difficult days, as Rigo didn't speak English and could not communicate with anyone.  With the help of some Spanish-speaking friends, Rigo found Neighborhood Centers Adult School (Clinton Park campus) and began studying ESL with Oakland Adult & Career Education (OACE).

He found a job, and had to leave his studies, but returned quickly when he realized that he needed English Language Skills to develop his career.  In March of 1992, Rigo accepted a job at the Waterfront Hotel in Jack London Square.  Rigo continued his ESL classes while he worked in the banquet department.  Later, Rigo moved to East Oakland, but continued his ESL classes at the Edward Shands Adult School campus.

By 1994, Rigo had reached the top level of ESL at Oakland Adult & Career Education.  He saw an opportunity to apply for a "Banquet Captain" position, also at the Waterfront Hotel.  Rigo noted that his supervisor noticed his improved communication skills and was very encouraging.  Ultimately, Rigo became the Banquet Captain.

Rigo left the ESL program at OACE in 1994, and continued his studies in ABE with some basic math and writing classes, further improving his English language skills.

Rigo says he was 'very happy and motivated to stay in school because that satisfaction in my life came from my attendance in adult school.

“After several years, in 2003, I felt that I was missing something else in my life.  I decided to study computers at OACE.  I went back to the adult school again to look if there was an opportunity to learn computers.  I was so lucky because there was a program for beginners in computers.  I took the classes and everything came together for me because at the Waterfront Hotel there was another opportunity to work as Assistant Banquet Manager.  One of the major qualifications for this position was that the person applying had to have strong computer skills, and at this time, I had the skills and the experience.  Again I was so thankful and happy to be back to Adult School.

"In 2004 a very good opportunity came to my life, I became a Banquet Manager.  As a banquet manager, I’m charged with interviewing and hiring new employees, guest satisfaction, attendance at weekly food and beverage meetings, monthly inventory and assisting guests with billing and events.  In addition to facilitating motivational meetings with employees, I maintain facilities in good condition, assist in facilitating customer service seminars, and keep up my knowledge of food preparation and wine tasting.  I also generate reports to Food and Beverage Managers and assist with annual budgets improve with new ideas and create a nice employee work environment.  I have made my career in the Hospitality Industry and I'm very pleased with Oakland Adult & Career Education to offer programs for people like me, so that they may have the good opportunity to make dreams come true.  I made my American dream."