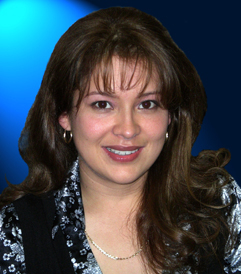 Ligia was born and raised in Los Angeles. She grew up in a single parent family with her sister and brother. She started working at the age of 15, when she was referred to different jobs by an agency assisting low-income families. During the next few years, she worked at different temporary positions such as day care assistant, cashier and many more. At the age of 18, she graduated from Venice High School with a grade point average of 3.5. After graduating, she attended Los Angeles Trade Technical College while working part-time as a cashier in an automotive store. After working there for several months, she was offered a full-time position and stopped attending college to work full-time.

In 1993, she accepted a position as a full-time receptionist and continued working evenings in the automotive store. She worked from 8am to 5pm as a receptionist and from 6pm to 11pm as a cashier. In 1995, she got married and left her evening job after she got pregnant. She worked until the very last day of her pregnancy and was blessed with her first child, Gabriela. After a short time, she returned to work while her mother cared for her new-born daughter. In 1996, she became pregnant with her second child, Jovanni. It was at that time that she and her husband separated. Later that year, she was laid off from her receptionist job. She starting looking for another job during her pregnancy, but it was difficult to get hired when she was pregnant. At that point, not being able to find a job and not having any financial resources, she decided to apply for government aid.

She qualified to receive benefits as a CalWORKs participant, where she received financial assistance to pay for day care, transportation and school expenses. In 1999, she enrolled at Abram Friedman Occupational Center (AFOC) and took classes in computerized accounting, computer literacy, business math, and business English. She was also required to do voluntary work in the school office. Later that year, she was hired as a Teacher Assistant at AFOC. She was assigned to the individualized instruction lab where she helped grade and record student work, and to the TOPS/CASAS Office where she distributed and collected TOPS and CASAS forms.

In 2001, Ligia took the promotional test to become a Computer Information Operator in the Adult Division. After passing the test, she was promoted at AFOC to work in the Student Information System (SIS) Office. Her duties were to assist the SIS Coordinator in data entry, generating reports and other office procedures.

Another promotion came in 2003, when she took and passed the test to become a Student Information System Coordinator, where her current duties include training school personnel in SIS procedures and applications, generating various reports for staff and administration, and other responsibilities. Ligia attended L.A. Trade Technical College for computer information courses. Upon completing her remaining courses, her goal is to promote into the LAUSD Information Technology Department and assist in improving and managing information systems.

Ligia had this to say about her life experiences: “My children have motivated me to accomplish my goals. I am very grateful for all the help that was given to me. I was fortunate to have available assistance programs to improve my job skills and obtain better jobs. I believe government assistance programs such as CalWORKS are a great help to people like myself. They help us stand on our own and becoming contributing members of our society. I also appreciate the education and assistance that I received at AFOC. I could not have done it without the help from this school and its helpful staff. I recommend this school to everyone.”