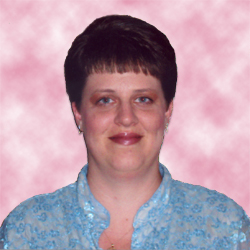 "I believe everything happens for a reason. I believe the things that led to my being homeless and on welfare happened for a reason. I look back on my years living in hotels trying to take care of my children and relying on welfare, I see that reason. I can talk to others who are now going through what I went through. I can offer myself as an example of what can be done with courage and determination" -- Angela Carter.

After several years of struggling to make ends meet, Angela decided to enroll at Bakersfield Adult School (BAS) in September 2003. She had received her high school diploma, but because of poor choices, and an unsuccessful marriage right out of high school, she found herself jobless and homeless. She knew she was going to have to make some changes.

“At first I was hesitant because I was so used to just being home," she recalls. "When I first started at BAS I was living out of motels and didn't have a car. It took me four to six buses just to get my older kids to school, my youngest son to daycare, and then myself to school. I had the determination and the willpower to succeed in life. I had to set an example for my children. I was persistent and eventually realized that life wasn't so bad after all."

Throughout her two and one-half years at BAS, Angela completed several courses in the business program as well as several Microsoft Office programs. She became an example to other students by being involved in the Student Representative Council and the BAS Site Council, where she served as President. These experiences helped build Angela's leadership skills and self-confidence.

"While I was attending the adult school I was able to rent a house for my family and get a car with assistance from the Department of Human Services,” says Angela. “The car was an old van that barely ran, but it was a step up from nothing!"

Angela's Welfare-to-Work plan ended her school phase as she moved on to her next phase – looking for a job. "At first I was discouraged. I had a lot of skills and knowledge, but nothing was coming my way. I figured I would continue to go to school, gain more skills and knowledge and when something was meant to be, then it would come."

Eventually, something did, says Angela, her excitement rising. "On February 14, 2006, I started working at Kern Schools Federal Credit Union as a temp in the Marketing Department using the computer skills I learned at BAS. My responsibilities have since grown, and on July 24, 2006, I became a full­-time employee of the Kern Schools Federal Credit Union as a Marketing Officer. I now have a wide variety of job functions, and I love going to work every day. Within the last few months I have moved to a much safer, healthier, bigger and beautiful home, and I have also bought a more reliable car. "

Angela gives credit to her business teachers who provided her with and critical factor in her success – support. "Arlene Vega and Mike Robison were very sincere with me and all the students. They saw the capabilities I and other students had and worked with us to build on our strengths. Also, the school principal, Susan Handy, was very loving and encouraging."

Today, Angela sees her goal as being a mentor and inspiration to other people who are in the same position she was. As a member of the BAS Community Advisory Council representing the credit union, she maintains a close connection with BAS working with them to identify community needs that can be met through programs offered by the adult school.

"I am most proud to say that as of April 1, 2006, I was off welfare assistance for the first time in about seven years and am fully able to support my family on my own. I wish I could express what a wonderful feeling it is," says Angela.