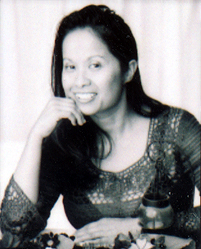 Oakland resident Nancy Normand was born in Thailand.  At the age of nine, with her mother and stepfather, Nancy came to the U.S.

After years of hard work and determination, Nancy opened her own business, Naalumon's Nit Noi Thai Temple. Nancy creates delicious Thai desserts made from coconuts and taro root.  These delectable treats can now be found throughout the Bay Area. "It's finally coming together," she says,  a radiant smile on her face and a sigh that suggests it has not been easy.

In 2004, Nancy enrolled in Oakland Adult and Career Education's VESL entrepreneurship program, run in collaboration with the community-based organization, C.E.O. Women. C.E.O. Women collaborates with Oakland Adult Education helping low-income immigrant women learn Business English and other skills needed to start their own small businesses. Nancy’s strong spoken English skills were evident, but she needed assistance writing English. Struggling to make it through school as an immigrant child, she was often humiliated at being held back due to her lack of English proficiency.

School was something that brought back bad memories to Nancy. As an adult, she tried many different jobs in the Bay Area: animal care, massage, and cooking.  Nancy always liked cooking best. For years, her mother has been in charge of making desserts for a benefit brunch at the Thai Buddhist Temple on Russell Street in Berkeley, often with Nancy at her side.

One day at the temple a customer who was waiting in line for one of their creamy coconut concoctions said, "Look at the line here every Sunday. You are sitting on a gold mine."

"That's when I really got inspired," Nancy says. "I decided I wanted to build something for myself."

Soon she ran into difficulties. Although she found a storefront owner who offered her six months' free rent, she really was not sure she would get enough traffic to pay her bills later. A business consultant she hired seemed more interested in the size of his cut than in helping her make good decisions. The last straw was an architect telling her that remodeling the space would cost $100,000. "I was overwhelmed with all the overhead, the equipment, the hours I'd have to put in," she says. Later she looked into the option of a food cart, but the health department nixed cooking on carts. "I went from let-down to let-down," she says. "It made me tired. So I gave up." When the C.E.O. Women staff noticed Nancy had stopped coming to classes her Adult education teacher called and emailed her repeatedly.

"I was slacking and they called me and said 'What's going on? We want you to finish,'" Nancy recalls. That made her think, "There's someone out there who really cares!" and so she returned. A C.E.O. Women business instructor and an Adult Education ESL teacher, helped her write a new business plan reshaping her dream into a step-by-step plan for profitability. Nancy noticed that farmers markets were thriving all over the Bay Area, and decided to use them to introduce her gourmet desserts to a curious public. A storefront could come later perhaps, after she had a strong customer base. She named her business Naalumon's Nit Noi Thai Temple. (Her Thai first name is "Naalumon" and Nit Noi means "little"), as salute to the place where her mother taught her Thai culinary traditions.

Thanks to three years of hard work, Nancy has started her own business. Most of all, she has overcome her fear of learning, and now believes she can be successful, despite the odds. Her Web site just went up (www.naalumon.com); her logo and business cards are finished. She has secured a spot at the Hayward Farmers Market on Main Street between A and B Street in downtown Hayward on Saturdays between 9 a.m. and 1 p.m. to sell her delicious Thai desserts made from coconuts and taro root. Her famous Thai Desserts are also on the menu at the Prism Café in Oakland.