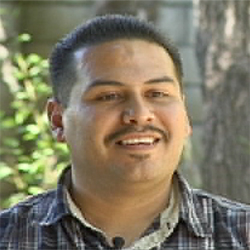 Gerardo Quinones dropped out of high school as a freshman and then enrolled in continuation school. Later, having a wife and four children, he finally, tired of low paying warehouse jobs, and with his wife made the decision to return to school and get his GED. Each time Gerardo completed and passed a subject, he would share his academic success with his wife and kids.

The dynamics of Gerardo’s home began to change. His family was proud of him and he was beginning to wonder if he could be successful in other areas. He decided to try the Medical Assistant Program. He credits his instructor, Maureen Vena for encouraging him on a daily basis to take pride in his work and not settle for low paying jobs. She gave him the vision and encouragement he needed to risk applying for a coveted Los Angeles County job.

In Gerardo’s native culture, acquiring a good county job was not a common occurrence, especially one with benefits and advancement opportunities. Most of his friends and family don’t even know what a pension is. Nevertheless, he went to work for U.S. HealthWorks while attending the EKG Technician program at night.

In the summer of 2006, Gerardo received a call to interview with the Los Angeles County Hospital system and upon passing fingerprinting clearance received the job. He is now a Monitor Technician at the Greater ElMonte Community Hospital. Showing his appreciation, Gerardo called Ms. Vena to let her know that the skills she taught him and the confidence that she gave him made a real impact in his life and the life of his family.

Gerardo wants to continue his education and make a career with the County of Los Angeles. He is currently considering attending a private college to earn his Ultrasound Certification. Gerardo says, "My life has always been a scary rollercoaster ride. Now the rollercoaster is a great ride, with God helping to guide me. I thank the Adult School for switching the tracks."