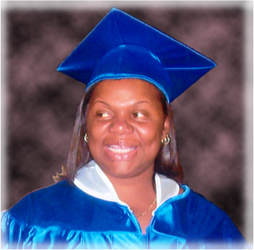 At the age of 39, Gealeta Perkins returned to school to earn a high school diploma. She had been planning to return to school for the last twenty years but there was always another excuse. In 2004, Gealeta’s son “was supposed to graduate from High School and he didn’t.”  She explains, “I tried to explain to him the importance of a High School education, only for him to turn to me and say, but Mom, you don’t have a diploma and you did just fine. That made me think; how can I preach about a good education and the importance of one, if I don’t have one myself. Now, I must practice what I preach. So, I finally went to sign up for school in the summer of 2004. Then, I found out I was pregnant after 19 years.”

Trying to raise a son, being pregnant, working, and going to school were obstacles that stopped Gealeta for a short time. However, she says she felt like, “I didn’t have the right to give up. I now have to practice what I preach with three boys.” She had twin boys February 2005 and signed up for school June 2005. She says she was more embarrassed than discouraged. “I had to change my schedule at work and at the same time keep my secret about going back to school for my High School Diploma. I had lied about having one when I got my job. Needless to say, I lost my job because a secret can only last for so long. Luckily, I did have a part time job.

“My new schedule was a difficult one; everyday I wanted to quit. My twins were four months old and it was hard being away from them for so long everyday. My eldest son helped me out a lot, but he was only 19 years old.” Her son had gotten in trouble, so in the middle of going to school, Gealeta had to go back and forth to court, find a reliable and affordable babysitter, and work enough to help pay her bills and the lawyer she had hired for her son.

She was making good progress in school, earning A’s and B’s in all her subjects. She was a model student, trying to make sure she understood all her work and didn’t skip anything. She set out to encourage her sons, and in the end encouraged other students as well. Having to pass the CAHSEE was another obstacle Gealeta had to face. While she wasn’t concerned with the English portion of the test, she was very concerned with the Math.

While she understood the requirement of the CAHSEE, she was empathetic with the plight of the High School Seniors who would complete their credits but not pass the CAHSEE. The adult school students would be faced with some of the same challenges. She wrote a letter to the Governor to protest the added requirement of the High School Exit Exam for Adult School students

When Gealeta did not pass the CAHSEE, she became very concerned. She thought “After everything I’ve gone through, all I could say was, Lord, why me? All I kept hearing was-I never give you more than you can bear.” Though she did not agree with the requirement, she continued to prepare for the CAHSEE, taking the extra classes and doing the CAHSEE assignments. Her tenacity motivated others, including her son, who went on to complete his credits and pass the CAHSEE.

The encouragement she received by her success in passing the ELA portion of the CAHSEE was dampened by her lack of success of passing the Math portion. Not willing to give up, Gealeta completed her High School credits in time to participate in the graduation ceremony. Although her spirits were dampened, Gealeta realized she had come too far to give up her hope of having a High School diploma. She continued to prepare for the CAHSEE, vowing this would be the last time. At last she conquered the exam by passing the math portion in July of 2006. She then went on to pass the interview and testing process for Contra Costa County Department of Corrections and she is currently in the process of becoming a Correctional Officer.