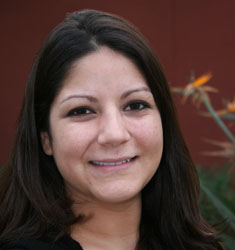 Andrea Chavez was a senior in high school and a teen mom enrolled in the Sierra Vista Independent Study Program in 1999. Her instructor, Carmen Telles, was made aware of a special training program being offered by the Whittier Adult School’s Business Skills Center that was targeting at risk youth and teen parents. She chose Andrea as a candidate because she saw her motivation to do well in her studies and that she wanted to do well for herself and her son.

The special program’s focus was to establish skills in the medical field, which would allow students to obtain an entry-level position that would pay beyond minimum wage, offer health insurance and benefits, which would assist them in living independently and supporting themselves and their children. The medical field because of the many career paths that could be established once the students “foot was in the door”. Andrea successfully balanced both her high school diploma and her Adult Education courses in the Medical Receptionist/Scheduler Program, completing them simultaneously.

After completing the Medical Receptionist/Scheduler Program, she completed an internship at Presbyterian Intercommunity Hospital’s Gallatin Medical Center. She had the opportunity to verify insurance, obtain authorizations, assemble medical charts, answer telephones, and various general office duties. This laid the foundation to be hired by Southern California University of Health Sciences (formally known as the Los Angeles College of Chiropractic). Andrea was initially hired on a temporary assignment as a billing support clerk, but her talents were quickly recognized and she was offered a full-time position as a Junior Insurance Coordinator in the Central Billing Department. She has just completed 7 years with the University and currently holds the position of Senior Financial Insurance Coordinator overseeing the department. She loves her job and the staff she works with and could not imagine working anywhere else.

Andrea says that being a single parent has been quite challenging for her, but the help and encouragement she has received at the Whittier Adult School has been instrumental to her success. Her Independent Study Teacher, Carmen Telles, and the Whittier Adult School Staff Members including Gayle Harmon (Medical Instructor) and Debbie Mineau (Job Developer) were wonderful in helping her develop the skills she needed to be effective in the field. She also credits her mother for keeping her on track, assisting with her son and encouraging her to continue her education. Her current Manager at the university, Lori Valdez, continues to be her mentor motivating, challenging, and supporting Andrea.

Andrea is currently attending Cerritos College majoring in Business Administration with an emphasis on the Health Care field and is enjoying raising her seven-year-old son Christopher.