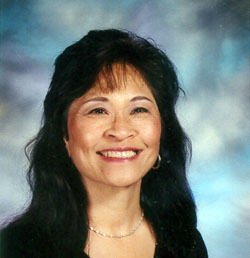 Whatever your age or situation, it is never too late to go after your dreams. Sandee Chan is no exception, she was able to follow her dreams and make them come true. It’s been over thirty years since Sandee graduated from the University of California, Davis with a degree in Child Development. After graduating from college, Sandee decided to move back to San Francisco and was hired to work as a clerk in the Controller’s Payroll Release Department. During this period of time, Sandee married her childhood sweetheart, Albert. They had two children, Alexander and Nicolas, and Sandee decided to become a stay-at-home mom for the next 25 years.

Sandee raised her children and did volunteer work at her children’s school. As the years went by, her two sons grew up and set out on their own she now had time to refocus on herself and her future. “I was happy with my life,” Sandee says, “but I felt like there was something missing.” She contemplated going back to school to update her job marketing skills. Her passion has always been centered on children and her goal was to work in an environment that’s exciting, challenging, and rewarding. Now in her 50s, Sandee was too young for retirement, and felt that the opportunity to go back to school was ripe.

With this new goal in mind, Sandee decided to research some schools and community colleges in her neighborhood and found the South San Francisco Adult School on the Internet. The adult school programs had flexible hours, affordable prices and met her personal schedule. In 2004, Sandee enrolled in the adult school and received Certificates of Completion in two computer courses, Introduction to Computers and Windows XP. The following year she earned two more certificates for Microsoft Word 2003 and Microsoft Excel 2003.

Sandee was able to confront her fears, increase her self-confidence and was able to put her newly acquired skills to use. In early September 2006, the former principal of her children’s school contacted Sandee and talked to her about her computer classes and newly acquired skills. He then offered Sandee a position as computer instructor and teachers aide at Our Lady of Perpetual Help in Daly City. Her new job involves working with children, grades kindergarten through grade 5, teaching them computers as well as helping them in the classroom.

Sandee now works part-time at a very good starting salary. There is also a promise of a full-time position in the next school year when funding becomes available. She is continuing to further her computer skills by taking Microsoft PowerPoint and Microsoft Access. She encourages other students who may not know where to start or who may lack the confidence to take that first step saying, “If I can do it, so can you!” Sandee volunteers during her free time at the St. Vincent de Paul Society of Mater Dolorosa Church. She helps the needy and suffering in the community by providing food through home visits and assesses their need for supplements and assistance in the areas of household goods, utilities, rent, and transportation.