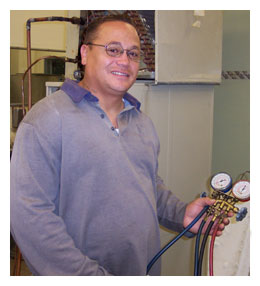 "Walking into the HVAC class at Abram Friedman Occupational Center, I was greeted by a few students and Mr. Hector Tejeda, the HVAC Instructor," says Frank Romero, a Workability Advisor for Los Angeles Unified’s Adult Education Department. "One of the students that greeted me introduced himself. Marcus Jenkins seemed to always have a smile on his face and asked if I could help him find a job since he was close to completing the class and had bills to pay. I heard later that he has two sons and a daughter and he knew they needed money."

Before coming to AFOC, Marcus had worked as a janitor for a company in Beverly Hills.
He could barely live on the $7.25 per hour pay, and knew that there was a better paying position out there for him. His father had worked in HVAC, heating, ventilation, and air conditioning, for many years before him, and Marcus saw himself following in his father's steps. When the janitor position ended a friend referred him to AFOC where he enrolled in HVAC classes.

Adult Education produced almost immediate rewards for Marcus. The week after he got his certificate, he applied for work at Loew's Hotel in Santa Monica. He came back to the school the next day glowing with optimism, reporting that he might have a job. "Marcus was so happy about his interview," recalls Mr. Romero, "he asked me to call to see if it was true that he might have a job. I called the HR department at the hotel and spoke to the rep. The young lady knew who I was talking about because Marcus ‘was the one that always had a smile on his face.’ She was very happy to let me know that he did well in his interview and that they would be bringing him in for an orientation meeting the next day.

"Marcus has been working at Loew's Hotel as an HVAC Mechanic for almost two months and now is able to send his children much more money now than what he sent before. Marcus is very happy that he invested his time with Adult Education and wants to work in Maintenance to improve his skills. He has continued to take classes at AFOC while working, and wants to continue his education in Plant Maintenance Engineering, and attend Cal State University Los Angeles."