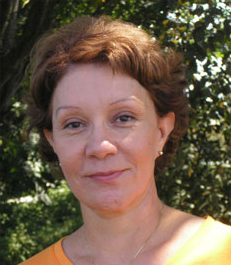 Born in the state of Sinaloa, Mexico, Mariza Rivas and her eight siblings moved with their newly single mother to Tijuana where the family made a converted bus their new home. Mariza recalls her family being very, very poor. They had no electricity in their bus/home, and cooking was done outside on an open fire. Mariza was fourth from the youngest child, and the responsibility of caring for her three younger siblings, while their mother worked mornings cleaning houses, fell to her. After her mother returned home Mariza went to school, and after school would often "work" selling treats or polishing shoes on the streets of Tijuana with the hope of bringing home a little money to help support the family.

Mariza credits her mother with instilling values, discipline and a love of education in the large family through these hard times. Every weekend Mariza's mother would rent three taxi-vans so she could bring all nine of her children to the library to read. When Mariza was thirteen she earned and saved enough money to buy her mother a beautiful blue battery powered radio, and together the family would listen to novelas. "Our imagination grew!" exclaims Mariza.

At nineteen, Mariza married her husband Antonio. The young couple moved to San Diego where Antonio was studying at San Diego State University for his Bachelor Degree in Education. Mariza enrolled in Adult Education, taking ESL classes. "The Webster's Dictionary became my Bible,” she says. After some months she registered for a class in Dress Design at San Diego Community College. It was a way to test her newly acquired English proficiency. Not only did she discover that she could understand and even speak, but she also learned a new skill that enabled her to sew clothes for her family, which now included their first son.

After first moving to the northern San Diego County city of Escondido, the Rivas finally arrived in Watsonville, where they now live. Mariza continued attending Adult Education ESL classes, and as her proficiency in English grew she got a job in the Pajaro Valley Unified School District as a bilingual teaching assistant. She served as an informal tutor for her classmates in the Advanced ESL classes. "I always attended Adult Ed," stresses Mariza. The family grew to four children, one now sadly deceased, and Mariza became a U.S. citizen. Antonio, a teacher and school administrator, and today the Mayor of the City of Watsonville, has remained Mariza's ally and staunchest supporter through their journey together.

At Watsonville/Aptos Adult Education Mariza, who says "by then I had bigger plans for myself," enrolled in GED preparation classes. Her natural interest in the world around her was fueled by teacher Frank Bardacke, who had his students read the newspaper daily, including the obituaries. Frank told the students, "If you ever want to know history, to know what's going on, read the obituaries!" Her confidence continued to grow as math teacher Ann Veronica Coyle often reminded her, "You know, Mariza, you know more than you give yourself credit for." She grew to enjoy math, and when she enrolled in Cabrillo College in Aptos, California, she found that the Pre-Algebra she had studied in her GED classes prepared her well for the more advanced math and science classes that she took in preparation for her nursing degree.

Mariza earned her GED in 1985, and immediately began studies at Cabrillo College to become a nurse, which was her lifelong dream. Knowing that she wanted to work at Watsonville Community Hospital, Mariza took a job as a Nurse's Aide and earned the esteem and respect of her colleagues, some of whom became her mentors. She became the "school mom," always finding time to be in her children's classrooms, tutoring and helping, especially the children who were learning English. To this day she remains close friends with several of her children's teachers.

Earning her nursing degree in 1991, Mariza was immediately hired as a nurse at Watsonville Community Hospital, even before knowing whether she had passed her board exams. When she exclaimed, "But what if I didn't pass?" administrators confidently replied, "We know you're going to pass." Mariza began to fulfill her vision of nursing, not only caring for her patients' health, but also being an educator and advocate. In 1991 there were only four Latina nurses at the hospital, which for many years has served a large number of Hispanic patients. Mariza has been a leader in working, not only for patient rights, but also for the rights of her sister and brother Latino nurses, sometimes speaking out and acting assertively, engaging in bargaining as a union member, and earning the respect of the hospital community. She has worked tirelessly to assure that non-English speaking patients understand what is happening to them and what they should do when they return home. For years, on her own, she has translated hospital documents, instructions and directories into Spanish and in March of 2006 realized her dream of seeing her bilingual hospital directory posted at the reception area. She serves as a mentor for Cabrillo College students interested in health careers and as a preceptor for nursing students in their last year of clinical studies. She encourages Latino youth, female and male, to become nurses.

Mariza has traveled to poor areas of Peru with the Peruvian Project, administering to patients there who have little or no access to health care. And through all this, Mariza continues to provide high quality care to the many patients she has served in maternity, medical and surgical, same day surgery, pediatrics (her specialty), oncology, diabetes education and now special procedures. As a bicultural and bilingual nurse, she is able to inspire comfort and confidence in her patients who come from many differing backgrounds. When asked what drew her to the healing profession, Mariza responds that her mother was a curandera, a healer, whose ability to minister to people using insight and natural remedies can be integrated with Western medicine even today. It was natural for her to use the same gifts that were given to her mother, who, at 88, continues to live independently in Tijuana.

In addition to her nursing, education and advocacy, Mariza finds time to meet regularly with a group of Latina women in a safe place, counseling them as they grapple with family relations and cultural issues in a new country. She is in training to earn her credential to teach CPR in Spanish at local companies that have a majority of Spanish speaking employees. She is also involved politically, supporting her husband's campaigns and his work for social justice for the people of Watsonville, especially the poor. She is active in the Democratic Party and supports candidates whose values mirror her own.

Recently she traveled with Antonio to Washington DC for a meeting of the National Association of Latino Elected Officials. She was called upon to help a passenger who had become seriously ill. Always the educator and an empowering person, Mariza called upon a young Emergency Medical Technician student on board the flight to take the required notes of each procedure and record the patient's responses as she stabilized him through warming, intravenous hydration and administration of medication from the plane's emergency supply kit. On the ground, as the patient was being transferred to an ambulance the EMT student enthusiastically told Mariza, "Now I really want to become an EMT!"

While acknowledging the importance of her role as a teacher, Mariza recognizes that she is a lifelong leaner, too. Last year she returned to Adult Ed to take computer classes, and will continue as time in her busy schedule permits. Mariza says, "I am encouraging others to do the same to better their lives and to be a great example for their children, and their community."

Reflecting on the role of Adult Education in her life, Mariza concludes, "Adult Education gave me the confidence and the tools to build a strong foundation to pursue and to overcome the many obstacles presented to me while getting my Associate Degree in Nursing. I am honored to be nominated, and I offer many thanks to all my instructors who believed in me and encouraged me to pursue my dream."