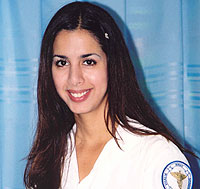 Alyah Kharoufeh's road to success is an example of hard work, strength of character, determination and humility. When faced with roadblocks, she overcame them, always moving forward determined to meet her life goals, not only for herself, but for her son as well.

Alyah came to California from Arizona after leaving a marriage that had been arranged when she was sixteen years old by her Middle Eastern parents. Her family in New York ostracized her for breaking cultural and traditional customs, and having no family in the area, Alyah had to call upon her own resourcefulness to provide for herself and her then two-year-old son. Alyah enrolled in the Visalia Adult School and quickly completed the GED program, earning a high school diploma. Next, she completed the Medical Office Procedures and Certified Nurse Assistant certificate programs, both with high honors, leading to full-time employment as a medical assistant.

Alyah faces difficulties and challenges every day. She is a single mother of a four-year-old son, Jamil. As challenging as being a single mother is, Jamil has been diagnosed with ADHD and is challenged with delayed speech and hearing problems. Determined to make a better life for both Jamil and herself, Alyah perseveres, not allowing life's challenges to deter her from her goals of earning a nursing degree. After rigorous testing and screening of almost 200 potential vocational nursing students, Alyah was one of 30 candidates selected to begin the 13-month program in January 2002. Knowing the strain that nursing studies and raising a handicapped son alone would put on her finances, Alyah applied for and was selected by the Soroptimist organization as a scholarship recipient for two top local awards. These awards allowed her to become a full-time student.

Alyah has successfully completed her programs at Visalia Adult School despite her personal hardships. More than the unfailing determination she has shown, she is admired most for her humility, which was evident when she received notification of her selection for the vocational nursing class and for her scholarships. She credits the Adult School for helping her through the hard times. "I could not have done it without the help of all the kind people at Visalia Adult School," she says in appreciation of the teachers and staff that have helped her achieve her goals.