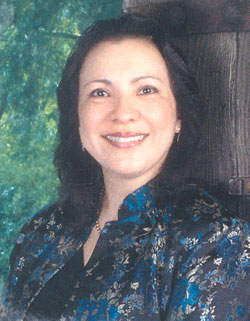 Full of dreams and ready for a better life for both herself and her family, Milagros (Milly) Estrada arrived from Lima, Peru on August 9, 1990. She, with her husband Eduardo eventually bought a home in Antioch where they now live with their two children, Jorge and Daniel.

"I came to the United States 16 years ago," says Milly. "As an immigrant, I had to face many difficulties, but the most challenging one was not knowing the language."

Milly recalls her early days at the Pittsburg Adult School. "My first contact with formal education in the United States was at the Pittsburg Adult Education Center. I attended morning and evening classes. Mrs. Navarra was my teacher. She was a very dedicated teacher who had a mission; have her students learn English. I was very excited about learning a new language. The learning environment at the Adult Center was inviting and friendly. Going to school gave me the opportunity to further my education and achieve many goals. The Adult Education Center opened my horizon and made me realize that the only way I could be successful in this country was by learning English."

Going to school was one of Milly's first contacts with people from other cultures around the world. Mrs. Navarra would pair students who did not speak the same language together. They were forced to communicate in English. The conversations may not have been pretty, but English was the only common language between them, and this method was a successful learning and teaching tool. Mrs. Navarra also had the students share their own cultural experiences and she organized potlucks a new experience for Milly – with students bringing food from their own countries.

Milly became pregnant during that first year and Mrs. Navarra organized a baby shower for her. The camaraderie of the class supported Milly in her goals of learning English, and prepared her to succeed in college.

"After I attended Pittsburg Adult Education Center I went to Los Medanos College where I received my Associate Degree in Liberal Arts," says Milly.  In Peru, she had earned a bachelor's degree which she was able to "revalidate," and then she obtained a Multiple Subject Teaching Credential. She is currently pursuing a Masters in Curriculum Development from Chapman University.

"I started working as an ESL teacher aide in 1992 for the Pittsburg Unified School District (PUSD)." Milly continues. "Next I worked as a preschool teacher at Los Medanos College in the Child Study Center. After 5 years of working at the college I was given the position of Director of the Child Care Center. I have also worked for Head Start as a preschool teacher. I was a director of the Pittsburg Vision Child Care Center at Solomon Temple."

For the last five years, Milly has been a Fifth Grade teacher at Los Medanos Elementary school in the Pittsburg Unified School District. She also teaches ESL at Pittsburg Adult School, where she first learned English.

Milly's nominator, Stella Orona writes, "The impact of these early experiences for Milly are evident in the passionate way she encourages her second language students to support each other and incorporates lessons to help students become aware of and seize the opportunities that are there for them and that will enable them succeed as she has done."