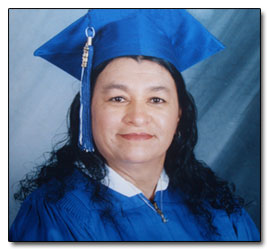 Miriam Ventura was the oldest student in a class of teenagers at Whittier Adult School. She wore a bright smile to class each day, indicative of her upbeat attitude. Spreading her "sunshine" to the younger students she soon gained their respect and admiration as they listened to her dispense sound advice, gained from years of experience, on the importance of education.

Miriam came to the Academic Skills Center of the Adult School on July 12, 2000 hoping to earn the 180 credits she needed to receive a high school diploma. Originally from El Salvador, the hard and abusive life she had lived over the past 51 years, not only earned her respect, but in the words of her nominator, Rosalee Thompson, also, "made her one of our strongest students." In spite of her past, and the challenges she had with language, Miriam persisted, always looking toward the future.

Miriam managed to raise a family while going to school. She also made time to volunteer at one of her daughters' schools, and was the Associated Student Body representative for her high school diploma class.

After attending school for 1,083 hours, Miriam had earned enough credits by June 9, 2003 to call herself a high school graduate. She gave a moving speech at her graduation ceremony a few days later on June 17 of which it is said she, "moved all who attended."

"Miriam went on to become an Instructional Assistant in the middle school she volunteered in," Rosalee tells us. "She also volunteers with the Red Cross."

"I don't know what Miriam's future plans are," adds Rosalee, "but I know she will succeed because of her determination, positive attitude and faith."