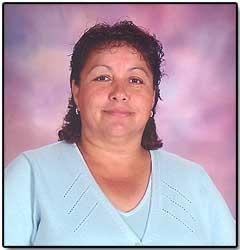 Anita Mendoza enriches her life daily through her job as a preschool teacher at Peachland Preschool in Anderson Valley. She is in her element surrounded by the forty plus thriving children enrolled in her program. The path to this lifelong goal of being a teacher has been a mountainous one filled with difficult challenges that at times took her to the depths of the valley below, and at others lit the spark in her heart for education that has inspired her to climb to reach the heights above.

Anita's parents brought her to the United States from Mexico when she was four years old. Their life together was a rocky one as they tried to adjust to a new life of long and difficult hours in the field, and moving from one place to another. Neither parent had any formal education, nor could they read or write. Anita remembers her father using his thumbprint to sign papers. His strongest wish was for his children’s education, that they would be able to attend school, graduate from high school, and be able to do something other than work in the fields. He told his children he did not want them to just look at books and not know what they said. Anita treasured his wish in her heart and was able to attend school to the eighth grade despite her parent's divorce and the instability it left in her family. She lost contact with her mother for twenty-two years afterward.

Anita’s desire to teach started when she was very young. She has memories of playing school with her cousin, using the straw dolls that her grandmother made to fill the “classroom” with “students.” She also recalls always wanting to be a teacher, but never dreamed it would ever become real. The ability was within her, she believed, but she also believed that her cultural background would never allow her dream to become reality.

On a visit to Mexico with her grandmother, Anita met a young man who brought with him the promise of care and stability. They were married that same year and moved to the United States. Anita was only twelve years old. School quickly became a thing of the past to the tremendous disappointment of her father. For years afterward, father and daughter did not speak. By the time she was sixteen-and-a-half, Anita was a mother of three.

The years quickly rolled by, and Anita had three more children. As the six children began going to school, teachers were encouraging parents to become involved in the classroom. Her husband showed no support for her involvement in the school, preferring adherence to the customs of his past, but Anita persevered. She was thrilled with learning and growing alongside her children. Eventually she became a bilingual assistant at the elementary school, and describes her time there as “growing up with the kids” and recovering some of the childhood and education she had missed.

Anita’s husband could not understand why, in the fall of 1993, she wanted to attend the newly established adult school and work on earning her GED. He told her he never knew she had so many dreams. With a full-time job, six children, and a household to run, he felt her life was complete. The first time she brought home her GED books he predicted that within four days she would give up and throw in the towel. Four days came, four days went, but Anita continued pursuing her goal. Support came from the teachers at both schools, but her husband continued his disapproval. His experience dictated that what she was doing wasn’t “acceptable.” He couldn’t bring himself to understand Anita's heart and how much she wanted to succeed. After nine months of hard work, Anita passed all of the GED exams. Her father was the first to know.

Anita received her AA Degree in Child Development in June of 2002. At the same time, there was a local opening for a preschool teacher. Her dreams were realized. Though her father did not live to see her receive her degree and job, she knows his pride in her is lovingly sent from above. As happy as she is with her achievements, Anita would still like to bolster her education and become a certified teacher someday. She is currently one unit away from finishing a community college class that will give her a Site Supervisor Permit for preschool.

It thrills Anita to touch each of the preschool children's lives before they go to kindergarten. She looks forward to coming to school each day and would not trade her job with anyone in the world. Asked if she gets tired working with twenty and more preschool children at a time, she shrugs her shoulders and focuses on the love and comfort that they bring. She senses their need for her and that is why she is there for them, constantly looking for activities that will enrich their classroom and experience and build routines and stability in their lives. She heartily encourages parental involvement.

With smile she says, “Education is the key to everything, no matter how old [you are] or how long it will take, there is always opportunity to do what you want in your career, to follow your passion.” Anita's father sparked a light in his little girl’s heart, and it is that light which continues to shine and guide this amazing woman.