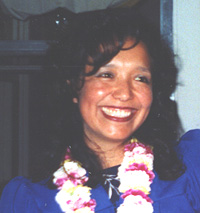 Speaking in her native Spanish, five-year-old Nadia said to her mother, "Mama, cuando yo sea grande, yo quiero trabajar en el fild como tu y me abuelita." – "Mommy, when I am older, I want to work in the fields like you and my grandmother." Ramona Linan's heart sank. She decided it was time to make a better life, not only for her two daughters, but also for herself. So, after many years of working in the fields of Watsonville, she enrolled in Watsonville/Aptos Adult School in January of 1989.

As a single mother, Ramona worked nights as a janitor and attended ESL parenting classes in the morning. Because the school provided a special childcare room, Nadia and three-year-old Jenny were able to be at school with her. This allowed her to put the English she was learning to practical use as she assisted in her daughter's room.

Little by little Ramona's life began to change for the better. She had overcome language barrier challenges by learning English, and now was ready to take the GED practice test. Staying focused, she easily passed the GED final test and earned a High School diploma. She couldn't believe it! Having had only six years of formal education, she thought it would have been more difficult to get her diploma.

Encouraged by her success, Ramona decided to enroll in the local community college. Cabrillo College appeared much more intimidating than the adult school, and though they were somewhat frightened, and a little reluctant at first, Ramona and her classmates from Watsonville decided to support each other, and start college together. She continued in ESL classes at Cabrillo so that she could continue to improve her English skills. Excited about her success, she returned to the adult school to visit her adult school teacher and tell her two exciting things. First that she felt like, "una quincenera," a teenager, and second, she had decided to continue studying to become a nurse. At the age of thirty, Ramona was renewing a long lost dream.

Working, going to school, and raising two girls did not make for an easy life. Making things more difficult, her husband, Jaime, became involved in drugs. Ramona decided to end their relationship. Eventually Jaime was sent to prison, but Ramona would take the girls to the prison for visits so they would still have contact with their father. Above all else, Ramona wanted what was best for her girls.

Ramona continued her education in spite of the challenges she faced. "With support from family, relatives, teachers, and my personal faith in God," says Ramona, she has been able to overcome her many challenges. To give herself more flexibility and make it easier to attend classes, she gave up the nighttime janitorial job and started cleaning houses. This made it possible for her to take all the prerequisites for the nursing program. When she had trouble with classes, support from the college was generous. She could always rely on plenty of help from the tutoring center. "The biggest challenge," she says, "was to continue to stay focused, motivated, and not give up with so many personal and socioeconomic problems in my life. I knew that I wanted to be a role model for my daughters, and I believed in myself and in finishing my career." Inspired by her mother's example and determination, Nadia, now eight-years-old, no longer wanted to work in the fields, but wanted to be a doctor instead. Ramona swells with pride over the positive role model she is being for her daughters.

One day, a counselor from the prison where Jaime was being held called Ramona and told her that her husband had changed and wanted another chance. It was a risk, but Ramona, never adverse to taking risks and always looking to her daughters best interest, agreed. After a lot of counseling, Ramona and Jaime were reunited. Jaime had decided to go to college too. Jaime had been soccer star at Watsonville High School. Ramona had been the "girl from Mexico." Now Ramona was the shining star and a positive roll model for Jaime.

Expecting their third child and wanting to give as much attention as possible to the birth, Ramona made the very difficult decision to put her education on hold. She returned to Cabrillo College's nursing program the following year and graduated in June of 2000, only one year later than planned.

They now have a fourth child, (all girls), and Ramona is working full time as a registered nurse in a care facility in Capitola, California. Eighteen-year-old Nadia is a student at the University of California, Santa Cruz (UCSC). Jennifer, sixteen, is in eleventh grade and wants to go to college when she graduates. She says, "When I was younger, my mother was in college and that motivated me. When I graduate from high school, I want to go to college too." And Jaime, Ramona's husband, completed Cabrillo College and went on to earn a BA in Sociology from UCSC. He went on to complete a masters program at San Jose State University, and is now working for Santa Cruz County in Watsonville helping youth and their parents who are struggling with drugs and gangs. He also teaches Parent Education at Watsonville/Aptos Adult School.

Ramona's successful trek through adult education has not only made her life better, but also the lives of those around her, especially her family. She is committed to her family, and looks forward to pursuing a Bachelor's Degree when her two youngest daughters are older. "I know that if I set my heart and mind to it I will make it happen."

Ramona encourages those pursuing adult education, "to believe in themselves and in what they are doing, and that it is never too late to get an education, and that it can be done."

"Ramona is an inspiration to all of us," declares proud husband, Jaime.