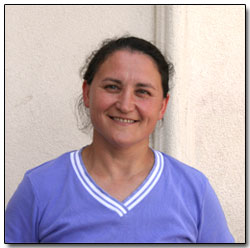 Hiding under the bed while the school director ransacked her family's belongings searching for illegal bibles, Mariya Torlak didn’t know that one day she would practice her religious beliefs openly and without fear. Born in 1962 into a Christian family living in the small village of Baurchi, Moldova, in the former Soviet Union, Mariya suffered the backlash of discrimination from teachers, employers and others because of her religion. As Christians, she and her family had no opportunities for higher education or well paying jobs. In school, she was punished by the teachers for not following communist practices. She was ridiculed by her teachers in the fourth grade for not wearing the red necktie that showed belief and pride in communist philosophy – a right of passage for all fourth graders. The school director and teachers came, uninvited, into their home looking for Bibles to burn, and telling them lies about their faith. Christians who could find work were given inferior tools and equipment and were relegated to the lowest job ranks. Being a Christian was an extreme hardship in the former Soviet Union.

For Mariya and her family, their church and their beliefs were the center of their lives. So, with aspirations of becoming a nurse, but without the remotest possibility of higher education because of her beliefs, Mariya took a job in a rug factory, and worked there for fifteen years. In 1983 she met and married her husband, Yuriy, in their church and by 1997 the couple had six children. In 1996 she heard from her brother who had already immigrated to the United States. He told Mariya the United States offered them the religious freedom they wished for. Mariya and Yuriy began making plans to leave Moldova.

The immigration process was not without hardship of its own. Before Mariya and her family could come to the United States, they needed to be approved by immigration. In order to get the proper papers, the whole family had to go to Moscow to be interviewed. Mariya and Yuriy, with their six young children, traveled for six hours by train to the Russian capital. They arrived with no place to stay, finally finding lodging by sharing a room with another family of eight. Sixteen people living in one room for two days. It would take another six months for the process to be completed.

Hardship continued when they finally arrived in the United States. Having six children, no money or transportation and not knowing any English was a frightening way to begin experiencing freedom. It was the summer of 1998, and Mariya had no idea how they would manage. They lived with Mariya's sister. She drove them everywhere they needed to go, registered the children for school, took them to the doctor and did any shopping that was needed. Later, they lived with her brother until they could find an affordable house, a three bedroom duplex with only one bathroom.

Having a place to live allowed Mariya to think about other things, like learning English. She enrolled in the ESL program at Elk Grove Adult and Community Education, and remembers how she and Yuriy with the six children would gather around the kitchen table every night to do homework, learning the new language together. After a year at adult school, Mariya needed to stop for the birth of her first baby born in the United States. She recalls going to the Sacramento Food Program for diapers and formula. The Center volunteers overheard her as she translated for other Russian speakers and asked her to volunteer as a translator at the Center. She had only studied English for a short time and couldn't believe she was being asked to translate, concerned about being able to meet the challenge. Nevertheless, she went to the center every week to volunteer, and surprised herself at how well she did and how much she learned.

When the baby was old enough for daycare, Mariya transferred to a community college where she took more ESL classes, along with early childhood development classes. Within four years she had earned both the Assistant and Associate ECS Teacher certificates, and then worked at the college daycare center for the rest of her time at the college.

Today, Mariya is a successful businesswoman and an asset to her community. She has established a daycare center in her home, where she cares for neighborhood children as well as the children of new Russian speaking immigrants. After school, she tutors children in English and helps them complete homework assignments. Along with other parishioners from her church, she continues to assist new immigrants from her village in Moldova adjust to life in the United States, providing lodging, food, clothing and connecting them to community resources. To date, approximately eighty parishioners from her church in Moldova have immigrated to Sacramento. For Mariya, her family and her church are still the center of her life and, like the Pilgrims before her; she has found a country where she can fulfill her dream of religious freedom. She gives thanks every day by giving back to the community.