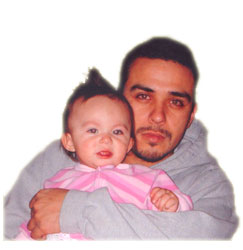 For Miguel Chavez, raised by a single mother in northern California's Yuba County, everyday was a struggle. For most of his young life Miguel's mother was addicted to drugs, and his family was constantly moving, the result of several evictions from homes described as being "in the ghetto." Occasionally, Miguel's mother would find work, but most of her meager earnings went to supporting her drug habit. They survived mostly on cash aid and food stamps. Miguel never knew his father.

Miguel spent most of his youth revolving in and out of juvenile hall and jail, and on probation. His record included convictions for vandalism, drug possession and domestic violence and he had been involved with gangs. At the age of 17, he became a father and dropped out of school so that he could work and support his child. Over the next four years he had two more children, and hopes of going back to school became a casualty of the choices he had made.

It was the fall of 2003, and the direction of Miguel's life was about to change. He was a 22 year old high school dropout and father of three, working a chain of low paying jobs that earned him enough to support his family. Then he heard about the YouthBuild Program. He heard that through the YouthBuild program a person could finish their high school education and get ROP Construction Skills Training. When Miguel went to apply for the program, he was told that he might have to quit his job because YouthBuild is an intensive 8 hour per day, 5 day per week program. Academics would be provided by Marysville Adult Education four hours each day, and ROP Construction Training would consume the remaining four hours. Joining the YouthBuild Program would mean further financial hardship on his already struggling family. At the time, he was working at a meat packing plant for $10.00 an hour, but the YouthBuild stipend was only $28.00 per day. He thought it over, talked with his wife, and weighed the advantages and disadvantages. In the end, Miguel decided it was a sacrifice with benefits which far outweighed the cost. It was important to him and his family that he get his high school diploma, and the next day, Miguel signed up for the program. He knew it would be a hard year, but he was used to living in hard times, and the end of this hard time held out promise for a much better future.

YouthBuild not only gave Miguel the education and skills he needed to meet his goals, but also gave him the opportunity to share and counsel youths about education and life's hard realities. While in the YouthBuild Program, Miguel went to several Junior High Schools in the Yuba County area to talk to young teens about staying in school, staying off drugs, and staying out of gangs. He told his own story about how he grew up, the mistakes he made, and how to avoid making those same mistakes. He also talked about how long it took him to finally "get it together."

Miguel graduated from Marysville Adult Education on May 4, 2004. That June, he received numerous ROP Construction Technology Certificates. He was accepted into the Plumbers and Pipefitters Union, Local 228, and is in his 3rd period apprenticeship and making $17.00 an hour plus benefits for himself and his family. Once he completes his 3rd year in the apprenticeship training Miguel will be a journeyman plumber making $30.00 an hour.

Miguel has also become involved in his community by attending the monthly Yuba County Board of Supervisors meeting to help support his community's growth. He attends school functions with his children and hopes they will be proud of what he has accomplished. Sheila Moore, who nominated Miguel for the Adult Education Students Succeed project, relates what he told her - he doesn't want his children to grow up without a father like he did. His children now number four, and according to Miguel they have everything they need – so unlike himself when he was growing up.

Miguel's journey has taken him down a rocky path strewn with painful obstacles and incredibly difficult choices, but it has brought him to a place where he can claim that his journey has been an incredibly satisfying success. His hard work, sacrifice and determination have brought him a nice three bedroom home, a new truck, and a wonderful family. The staff for the YouthBuild Program is very proud of Miguel and holds him up as a shinning example of how a person, armed with determination and an opportunity, can achieve what they never thought possible.