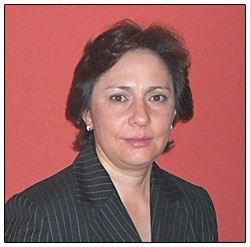 Veronica Navarro was born in Acámbaro, Guanajuato, México, in 1961. Even though her parents were not able to read and write, they worked hard in order to send her to High School. She graduated in 1979 with dreams of going to the University to get a degree in architecture. But her parents couldn’t afford to send her out of town, and in High School was the highest level of schooling available in her small town. Her mom wanted her to learn to be self-sufficient and encouraged her to take community classes in typing, shorthand, writing, cooking, arts and crafts and sewing.

After graduation, Veronica worked as a teller at a local bank. She met her husband at the bank, and they were married after a year of courtship. By the age of 24, she had three sons and could enjoy them at home since her husband was an educated business professional. Veronica and her new family traveled often to the United States to visit her husband’s side of the family in Chicago.

Then suddenly, her husband asked if she wanted to move to California, where Veronica’s mother’s side of the family lived. It was intended to be a temporary move to expose their young sons to English at an early age, and then the family would return together to Mexico. They arrived in Fresno, California in August 1986 seeking the opportunity of a bilingual education for their sons. Three years later, Veronica gave birth to their fourth son. The affluent lifestyle that they enjoyed in Mexico was replaced by daily economic struggles in the United States. Nevertheless, Veronica and her husband decided to stay in this country.

Although she worked part-time and volunteered, Veronica had to sacrifice her dream of furthering her education, in order to be a full-time mom to four children. By 1993, her sons had grown enough that she felt comfortable pursuing her goal. She was excited to finally be able to enroll herself in ESL classes at Livermore Adult School, where she was an eager and successful participant. Veronica progressed rapidly in English while volunteering in her sons’ schools, where school personnel took notice of her talents. After only two years of ESL instruction, Veronica was offered a full-time job as a Bilingual Aide and Instructional Technician at a school in Livermore. The tremendous accomplishment of learning English through the Adult Ed ESL classes opened many doors to Veronica. She continued to advance in English, learned more about the American Culture, and ultimately, had the confidence to enroll at a Community College. By the year 2000, Veronica was hired as a Classified Supervisor for the very ESL program in which she started. She now oversees the ESL program that so changed her life and is involved in many important services to the immigrant community.

Veronica’s success has made her a busy, though highly valued and respected woman. She is the coordinator of the CBET (Community Based English Tutoring) Program working directly with Livermore Adult Education’s ESL program. She also oversees other district programs such as ELAP (English Language Acquisition Program), The Migrant Education Program including the Preschool MEES (Migrant Education Even Start Program) and the Latino Family Literacy Project. Additionally, she works closely with the K-12 ELD department of the Livermore School District.

Veronica and her family have lived in Fresno, Union City, Fremont, Livermore and most recently Tracy. Even though they started over, ultimately, they were able return to a middle class life. Veronica spends most of her time in Livermore, CA, where she works. She considers Livermore her home base because of the opportunities for professional growth and for the close friends she has made there.

Veronica is extremely grateful for the ESL classes she took at Livermore Adult School. They definitely made it possible for her to be successful in reaching her educational and career goals.  She might not have reached her childhood dream of becoming an architect. However, she feels she has accomplished more than she ever dreamed possible in a foreign country. She is also a role model to her 4 sons who are bilingual and bicultural. “The English I learned in my ESL classes made me feel more confident. I am also able to understand the frustration of others trying to learn a second language. … My own experiences as an ESL student and as an immigrant have helped me and inspired me in so many ways. I can understand how people feel when they have just arrived in this country. I know their fears and frustrations. By sharing my experience, I am happy to be able to motivate others and serve as an inspiration for ESL students to achieve their goal to succeed in this country.”

Veronica says she may go back and finish college to obtain her teaching credential. In the meantime, she plans to continue working for the school district, providing the important services that make it possible for other immigrants to move forward.