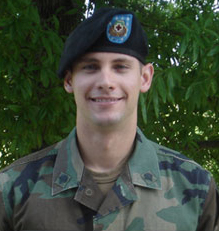 Joshua Bruce was floundering. As a traditional high school student he had numerous truancies, discipline problems and was behind in credits. The problem wasn’t intelligence; as you will soon see, Josh is very intelligent. Traditional education just wasn’t working. Entering the Diploma Gold program at Lassen Adult School seemed to be the answer.  Josh stayed on track and made up his credits. The flexibility of the program made it possible for him to work full-time as a security guard while going to school, and he graduated just a few months after he turned 18. With his high school diploma in hand, Josh enlisted in the Army where he has been very successful. Had it not been for the Diploma Gold program, it is questionable whether he would have graduated at all.

Josh joined the Army on January 2, 2003, shortly after graduation. After successfully completing basic training at Fort Benning, Georgia, he attended the Operating Room Technologist School at Fort Sam Houston in San Antonio, Texas. He was named Platoon Guide and graduated at the top of his class from phase one, receiving a special commandant's citation for outstanding performance. On November 22, 2003, he completed phase two at Fort Jackson, South Carolina where he is still stationed as a member of the surgical team for Moncrief Army Hospital.

Josh has received awards from both peers and superiors and was named "Most Productive Member of the Surgical Team". Because of his skills, he works as a first assistant in surgery and clocks more “scrub” time than any other member of the team, including the physicians. This means that he is selected by the doctors as their assistant more than any of the other OR Techs.

Considered one of the highest technical and most challenging classifications in the Army, this highly competitive program has a very high rate of attrition. Competing with Army medics and former civilian medical professionals, Josh graduated at the top of his didactic training class. Once he receives a national certification as an operating room technologist, he can work as a surgical assistant anywhere in the United States. OR Techs are in high demand and earn high salaries in the civilian world.

Still in the Army, Josh is currently enrolled at the University of South Carolina. He maintains a 4.0 average and is in the process of applying for the Army’s information technology program. If he qualifies, he will be trained in another highly technical field before leaving the Army. Already highly skilled as a computer specialist, his ultimate goal is to combine his medical and computer skills knowledge, experience and education into a career in the cutting-edge field of computerized medical technology. This is a field that will see unprecedented growth over the next several years and will require highly skilled and educated people who have backgrounds in both the medical and computer fields.

Josh is a very intelligent young man for whom traditional education was not working. Due to a lack of maturity and self-discipline, he simply had problems functioning in the traditional classroom setting. Given the opportunity to work at his own pace, with a flexible schedule, he quickly got back on track and completed his high school education.
The Diploma Gold program gave Josh the maturity and self discipline that are serving him so well as he pursues higher education and a highly rewarding career.

Josh credits the Diploma Gold program with helping him during a difficult period of his life and making it possible for him to reach his potential. He is very supportive of this program and recommends it for young adult students who are struggling with their education or for adults who are motivated to return to school and complete their high school education.