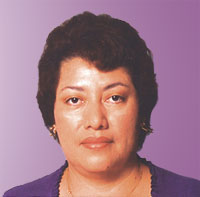 Rosa Contreras' portrait of success is an inspiring story of perseverance in the face of opposition. Her story will inspire others to go the extra mile and to never give up. Rosa is a hardworking, sacrificial, goal-oriented, self-confident woman who, in spite of challenging life circumstances, has not considered the path of dependence and self pity. Instead, she has taken advantage of the resources always available to her in the whole network of adult learning institutions to stand on her own two feet and reach her goals. She stands as an exciting example of the profound influence adult education has on each of us, the learners, their families and our communities.

In their native El Salvador, Rosa's brothers had been star pupils with whom she could not compete. Using the brothers' abilities as the standard, her teachers insulted and demeaned Rosa. Refusing to be discouraged, Rosa stubbornly worked even harder, but was still unable to measure up to her brothers' academic accomplishments. In spite of the insults, she persevered and was able to finish high school in El Salvador, but now married, was unable to attend the university. Her husband considered it inappropriate and unnecessary for a married woman to continue her education.

In 1989, at the age of 35, Rosa and her husband left their three children in the care of Rosa's mother and came to the United States. She worked full-time, five to six days a week, and together they attended the Community Education Center of Pasadena City College (Coordinator, Robert Adanto) at night. Her husband decided to drop out of the program at the Community Education Center, and encouraged her to quit as well. She refused and tried to convince him to re-enroll, but he refused. His friends had convinced him that she had ulterior motives for being in school, and he falsely accused her of looking for another man. Other verbal abuse soon followed. Rosa worked hard to pay bills and to get ahead, without appreciation from her husband. So, after 13 years of marital conflict they were divorced, and he returned to El Salvador.

Alone and in a new country, Rosa continued her studies at the Community Education Center, and found a job as a live-in baby-sitter, which allowed her to complete the high school diploma program in 1994. Instead of being encouraged to go on to bigger and better things, however; the people she lived with suggested this would be a good opportunity for her to return to her native El Salvador. Instead of listening to the negative advice, she took a short course at the ROP in Alhambra (Administrator, Irene Cox) and three months later became a Nurse Assistant. Gaining needed confidence, Rosa left the baby-sitting situation and moved in to her own apartment. Then she took more ROP classes at Monrovia ROP (Director, Nancy Wagner; District Administrator, Kathy K. Brandes) and became a Home Health Aid. She was now making better money and was able to replace her old car with a newer one.

Rosa is taking a pre-GED writing course now under the instruction of Barbara Newell. Even though she already has a high school diploma she is taking the course at Whittier Adult School (Principal, Leonard Rivera) so she can improve her writing skills. To improve her communication skills, she is enrolled in Dianne Wolf's ESL Advanced Listening and Speaking class. She is also enrolled in Whittier's Distance Learning program. She somehow finds the time in spite of working 50 hours a week. Rosa says, "this program helped me a lot. I improved my communication skills and got self-confidence, I have better communication with my patients and family. This has made me happy, and I love school."

Rosa is a Nurse Assistant for Hospice Home of Presbyterian Hospital in Whittier and is continuing her education so she can earn a license or certificate as a Registered Nurse. She is also working with patients in their homes as a Home Health Aide and and enjoys making a difference in people's lives with her nursing skills.

Rosa's children are still being raised in El Salvador. Much of the money she makes here is sent to her mother for their support and to improve their life. This is just another small example of the daily sacrifice Rosa willingly makes.

Teacher Dianne Wolf says of her student, "I feet privileged to know Rosa and to have the opportunity to be a positive influence in her life. It is because of students like Rosa Contreras — honorable, hard working, and hungry for learning — that I come to work every day with a song in my heart."