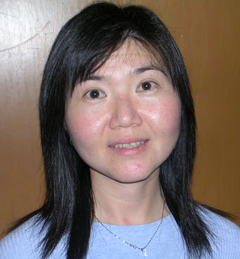 Lily Giang was born in Vietnam and was raised during the height of the war period. In the early 1980's, her father sent for her and the rest of her four siblings to live in Indonesia. A year later, they immigrated to the United States and settled in Richmond, California where she attended and graduated from Richmond High School.

During her early life, Lily worked in her father's business serving ice cream at a Baskin-Robbins outlet in El Cerrito, California. In 1993 Lily began work for the postal service working the graveyard shift sorting mail. She continued in that position until December 2002 when her health was failing due to the environment at the workplace. Lily was unemployed for the next six months trying to recover from her illness.

In July of 2003, Lily applied for unemployment and went to the Employment Development Department (EDD) in Oakland. It was there that Lily learned about adult education for the first time. EDD has a partnership with Edward Shands Adult School where teachers are placed there to provide workshops, training and employment counseling. Lily learned of the Accounting program at Edward Shands and decided that she wanted to give it a try even though she had no prior experience. Since this was a WIA funded program, Lily was able to have the costs covered for books through that program. Edward Shands has a low cost enrollment fee of $25 per course, so it was a very affordable program for her to pursue.

She called Edward Shands Adult School and was told that she could enter the program at any time because it was an open entry/exit program. Lily began her accounting classes immediately, attending five days a week for four hours per day. According to Lily, she learned a lot on how to control a budget. She especially liked math and numbers. It made sense to her to go into accounting because of her joy for math and numbers.

Her accounting teacher, Sandy Uridge says the following about Lily: "Lily completed Accounting for a Sole Proprietorship, Accounting for a Partnership, QuickBooks, and Accounting Applications on Excel. She knew the ten-key calculator by touch and achieved a speed of 192 keystrokes per minute. She was a very likeable, hardworking student with excellent attendance. She got along well with others and was always cooperative and eager to learn. Moreover, her work was exceptionally accurate. Lily worked independently and is bilingual in Vietnamese and English. When the Principal of Edward Shands, Chris Nelson, asked me to recommend someone from the class for an opening in the school district's accounts payable department, I suggested Lily Giang. She was hired within a few weeks as a Senior Account Clerk II."

During the interview for the job, according to Amy Fong, Accounts Payable Supervisor, Lily's appearance was very pleasant, nice and calm. She tried her best to answer all questions asked and gave very good answers. Even though she did not have a very strong background of financial experience, Amy knew Lily was the best fit in the department given the recommendation from her teacher, Sandy.

After Lily was hired, she worked very hard to learn every task that was assigned to her. Lily is a person who is very organized, accurate, fast learning, willing to take new responsibilities, has good customer services skills, and never complains.

As of today Lily has worked for almost two years managing all the payments for specific vendors and follows through with the problems with incomplete invoices. She is a very independent person and knows how to prioritize her workload with minimal supervision and help. According to Amy, during the last year-end closing, Lily had the least problems and bills left unpaid. Not only that, she had extra time to help the other people in the office to clean up their problems and help them input their payments. Lily has a very good relationship with people in the district and also her customers. She is very helpful and patient to all people calling from the schools and companies. Amy is very glad to have her on board in her division.

This job has made a tremendous difference in Lily's life. She has been married for 5 1/2 years and she and her husband Timothy own a home in East Oakland. She says that she was very happy to get her job with the school district. She uses her schooling and applies it directly her job. Lily says that "her knowledge and skills learned at Edward Shands is an asset to her on the job." Lily believes strongly that she can now apply for higher level positions within the school district because of the foundation of knowledge learned through the Accounting program at Edward Shands Adult School.