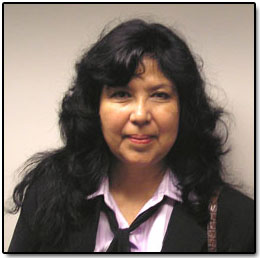 Today, Esther Lomeli is an Adult ESL teacher in Montebello Unified School District, but she began her education in Montebello Adult School. she credits her period as student and employee at Live Oak Adult Center of MUSD as the reason that she’s teaching now.

Although born in the U.S., Esther was raised from the age of two in Mexico, returning to California at the age of thirteen. The only English she knew was what she had picked up on the Mickey Mouse Club and American Bandstand TV shows. When she began junior high in Los Angeles, she was labeled “NES”: non-English speaker. School was difficult for her, and she often felt frustrated and isolated.

Esther married at a young age and began to raise her family of two children. In 1978, with her children in school, she began to study English again. While studying in 1979, Esther took a job as childcare attendant for Live Oak Adult School, the first of many positions she has held in Montebello district. She became a Clerk I in 1980 and a Clerk II in 1986 at MUSD. At the same time, she held a second job as a Bilingual Instructional Assistant in Downey Unified School District.

During this entire period, Esther was working toward her goal in Montebello Adult School. In 1980, she received her high school diploma and turned her sights toward higher education. Esther was highly motivated and attended community college, taking some TV courses at the same time, and by 1993 had received a Vocational Education certificate from Rio Hondo Community College. She then began teaching Vocational Education courses at Ford Park Community Adult School, in Bell Gardens.

Esther began attending La Verne University after work, and in 1998 received a BA and passed the CBEST.

Esther began immediately teaching ESL/Citizenship for Montebello Adult School. Her classes are very popular and well attended, and students know that Esther can be relied upon to give them 100% of her energy and commitment. Students of Esther’s Citizenship class almost invariably pass the tests and become citizens on their first attempt. Esther’s nominator, Phyllis Butland notes, “Ironically, Esther has been teaching citizenship on Saturdays in the same classroom I use during the week, making us co-teachers to many of the same students. I am always hearing testimonials from excited new citizens whom Esther has prepared. I feel lucky to have been there as a summer school teacher at the beginning of her education, and now again as a witness at this stage of her career.”

Esther teaches ESL and Literacy during the week. Montebello Adult School is proud to declare Esther Lomeli our “success story”, and we are very fortunate to be able to see the fruits of her talent and abilities with her/our students.