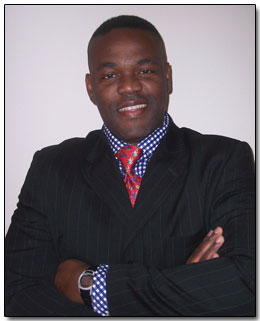 Mvelly Mfoud was born in the Republic of Congo. He grew up, completed high school and attended two years of law school while there, and in 1993 married and had two children. Hoping to better himself and provide more adequately for his growing family, Mvelly moved to France from 1999 to 2000 to take some classes, while his family remained in Africa. Supporting his family was still a struggle when his cousin, Andre – who by African custom is considered a brother – offered to sponsor him and bring him to the US.

Mvelly and his wife made the difficult decision for him to go to the US. He would have to leave his family behind until he could sponsor them himself. Andre became like a father to Mvelly, having him live with his family in San Jose. He paid most of Mvelly’s expenses for the next two years, and was his mentor on the ways of life in America.

Like so many other immigrants, beginning a new life in this country was not easy for Mvelly. The challenges were many, and the obstacles were often difficult, especially language. French is the language of the Republic of Congo, and Mvelly knew very little English. He relates a particular incident from when he first arrived. Riding his bike home from school he realized he had ridden over a small nail and punctured his tire. Not knowing how to say "flat tire" or ask for a "tire repair kit" he went to the nearest store in an attempt to purchase the necessary materials. It was the first time he had been shopping without Andre to accompany him. Slowly, he nervously approached one of the salespeople and, with an uncertain voice asked, "Euh, euh. My bike is passing air. Can you stop it?" Customers and salespeople alike broke out in laughter, but to Mvelly, it wasn’t funny at all, just embarrassing.

Mvelly spent three semesters in the Santa Clara Adult Education (SCAE) ESL program. He also took several computer classes with the goal of making himself highly marketable by learning as many programs as he could. The Computer Office Skills Program staff was impressed with Mvelly’s drive to work hard, his work ethic, and his "nobleness." They worked together to help him achieve his goals and move toward success.

Even though Mvelly has successfully completed several years of college, the staff encouraged him to begin building his resume by getting any type of job he could. Having work experience in the US could only improve his chances of success. He applied for several jobs right away, and was hired by SCAE for a short-term project. His competence was such that he was also hired to help the Information Technology department on a need basis.

New challenges arose as he began working at Office Depot. The slightly above minimum pay was not nearly enough to bring his family from the Congo, but it was a start. Language became an issue again as Mvelly adjusted from speaking English in a relatively safe and non-judgmental school setting to using English in the harsh and overly judgmental "real world;" the bicycle incident never far from his mind. In spite of the challenges, and in large part due to his work ethic, within a month Mvelly was promoted, given a raise and named "Employee of the Month." With regular raises coming his way, and priority in work hours, he was able to start saving. His dream of bringing his family to America was becoming a reality, and he was able to buy his first car.

In 2002 Mvelly was able to sponsor his family and bring them to the States. With Andre’s help he was able to find a small apartment where they could live. Reunited with his wife and sons, he was happily able to experience being called "Daddy" face-to-face, not just over the phone. Besides his wife and sons, Mvelly was also able to a sponsor his 14 year old brother, just as Andre had done with him two years earlier.

Mvelly researched what he would do next and decided that he would enter the medical profession. He started classes at Mission College and transferred to De Anza College, where he is majoring in nursing. In the midst of this, in 2002, Andre suddenly died, and though it was a difficult time for Mvelly, he continued working toward his American dream. It was his way of honoring the memory of his brother who had helped him to get established in his new home.

After a week-long training in auto detailing in San Diego, Mvelly applied for a business license. He bought a van and started his new business, Mobile Car Wash, in March of 2003. He was now going to school, working full-time at Office Depot and working in his own business.

He was able to quit Office Depot in 2005 and devote himself full time to his business and a nursing career. Mvelly and his wife now have three children. His wife works full time at Macy's, and his younger brother has graduated from high school and is attending De Anza Col1ege. Mvelly wants to complete his nursing degree, work as a nurse while operating his Mobile Car Wash business, and one day be able to purchase a home.

Adult education gave Mvelly the help he needed to learn English and establish himself in business. He is an outstanding citizen, businessman, and family man who is making a difference in the lives around him.