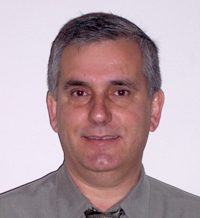 It has been a common thread throughout Jorge Reis's life that he continues to increase his knowledge and skills through education. Born to farming parents on the island of Flores in Portugal's Azores, Jorge worked with them from the age of eleven until seventeen when he decided to go back to school. However, at age twenty his education was interrupted when he was sent to serve 27 months in Africa with the Portuguese military. Afterward, he returned to school by moving to the island of Terceira to become a veterinary assistant. Then at age 26, Jorge's life took a significant turn. In the summer of 1976, his older sister visiting from California encouraged him to visit her after she returned home. She petitioned for him to get a visa, and by April of 1977 he was ready to immigrate to the United States. This was his first "dream come true".

Although Jorge says no one influenced him to enter the adult education program, "the need to integrate, understand life around me, and of course, the need to find a better job, kept me focused in school." Consequently, Jorge began to attend ESL classes soon after beginning his life in California. "Without learning English at Petaluma Adult School, I would not have had the chance to better myself."

Even that good intention had its own obstacles. Jorge lived in Cotati, a small rural community ten miles north of where he would be taking ESL and he had neither a car nor driver's license. By talking among Portuguese people in the community, he found a recent immigrant from Azores who was attending the same adult school. Jorge rode with him until he was able to get his first car and driver's license.

Becoming more proficient in English opened doors to better employment. Jorge had to leave the ESL classes he attended at night because of job changes. Determined to continue learning English, he enrolled in Lewis Adult Education Center in Santa Rosa for his second year of ESL. After marrying Leocadia on July 4, 1981, he had her valuable support for continuing educational ventures at Santa Rosa Junior College. While continuing to learn English, and with encouragement from an ESL teacher, Jorge began to take some math, and then computer classes at the junior college.

A milestone came with Jorge graduating from the junior college in 1982 with an A.A. degree in Computer Programming. He followed that with a transfer to Sonoma State University in the fall of 1982, where he worked full-time in maintenance while attending school. Jorge studied on his own to become a United States citizen, and in 1984, he was awarded his Certificate of Citizenship. Jorge again demonstrated his accomplishments, when in 1986; he was awarded a B.S. in Management with a Concentration in Finances.

Jorge held onto his vision of becoming more involved in the community where he lives as he became more proficient in the English language. This took on special meaning when his daughters, Monica and Claudia, began elementary school. Jorge joined the PTA and served on its board for 8 years. He also helped in the school as much as he could and became a teacher's aide at Monte Vista Elementary School in Rohnert Park. Jorge was motivated to reach further toward his dream of becoming a teacher. He finished his credential program in 1993 and became a bilingual teacher in Spanish. He has taught ESL, math, science, language arts, and history at Altamira Middle School in Sonoma for the past 13 years.

Jorge's diligence to reach the goals of his visions has led him through many chapters. His first job in California was in construction. From there, he worked in a convalescent hospital for six months. Next he worked for two years at Petaluma Poultry Processor in Petaluma. Then he spent the next twelve years in janitorial/maintenance at Sonoma State University. His education allowed Jorge to gain a job with a financial company as an account executive; and from there his profession in the education field began when he became employed part-time with Migrant Education.

With heartfelt appreciation to Petaluma Adult School for opening the door to learning English so his dreams could be realized, Jorge decided that he could give of himself by teaching ESL for the same adult school. Not only is he employed currently as a bilingual teacher; he has taught ESL since 1995 for Petaluma Adult School.

His love for Sonoma County is apparent by his involvement in the community and his knowledge of local politics. Jorge anticipates that even in retirement, his active participation in his community will remain a part of his lifestyle. He so eloquently states, "Learning English was my ticket to a better life".