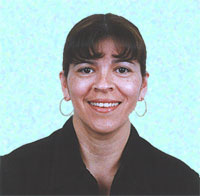 Socorro Flores came to the U.S. from Mexico thirteen years ago. For the last six of those years she has been a student at A.B.C. Adult School in Cerritos where she has shown herself to be a remarkably responsible woman. This mother of three works as a teacher's aide at Fedde Adult School in the mornings and spends her afternoons as a housekeeper. She takes great pride in both jobs deriving great satisfaction and pleasure from helping others.

Although she was often tired after cleaning other people's houses, Socorro would still come to school. She organized her time by having her children help with household chores, prepares her family's main meal in the early morning so that she made sure she had enough time to attend classes. When her husband expressed his concerns about her leaving the house at night, which is contrary to Mexican custom, rather than be discouraged, she persuaded her husband join her. This way, she was able to study at the ABC Learning Center and pass the Student Aide Test. Her husband was able to benefit from Adult Education as well.

Family Literacy classes have been a significant part of Socorro's success in meeting her life goals. During her six years in the program she passed her driver's license examination and became a US citizen. She also learned about real estate, which helped her to purchase her first home. In Spring 2002, Socorro was given the "Outstanding Student Award" and congratulated by Assistant Principal, Martha Noz, who encouraged Socorro's daughter, Perla, to follow in her mother's footsteps.

Jean Rose, a resource teacher at ABC Adult School, observed Socorro in class and encouraged her to have confidence in herself and to take the Teacher's Aide Test. To prepare for the test, Marilyn Ghysels, Supervisor of the Learning Center at Cuesta, provided a structured atmosphere in which Socorro was able to study at night. Socorro passed the test in 2001 and became a teacher's aide at Fedde where she blossomed as a classroom teacher. Her English improved a great deal because she spoke only in English, using Spanish as a last resort. She was a great model for students. Today, she can be found in the mornings still brightening the day for all those fortunate enough to be in her class.

Working toward her life goals, Socorro has improved not only her own life, but also her family's and others in her community. She has profoundly influenced her children with her ability to learn English and her diligent work ethic. With their mother as a role model, her three children are very successful in school. Perla, the oldest, is a graduating honor student at Gahr High School and has been accepted at California State University, Fullerton. Her community has felt Socorro's impact as well. As a guest speaker at Melbourne Elementary School, she spoke on behalf of the Family Literacy program to the schools P.T.A. Speaking first in English and then in Spanish, she described her experience in the program, and was very successful in recruiting new students.

Socorro is still moving mountains and fulfilling her dreams. She is currently working to become a full-time teacher's aide, and is constantly studying and improving her skills. Who knows, someday when her children are grown, she might just become a teacher. She certainly has what it takes.